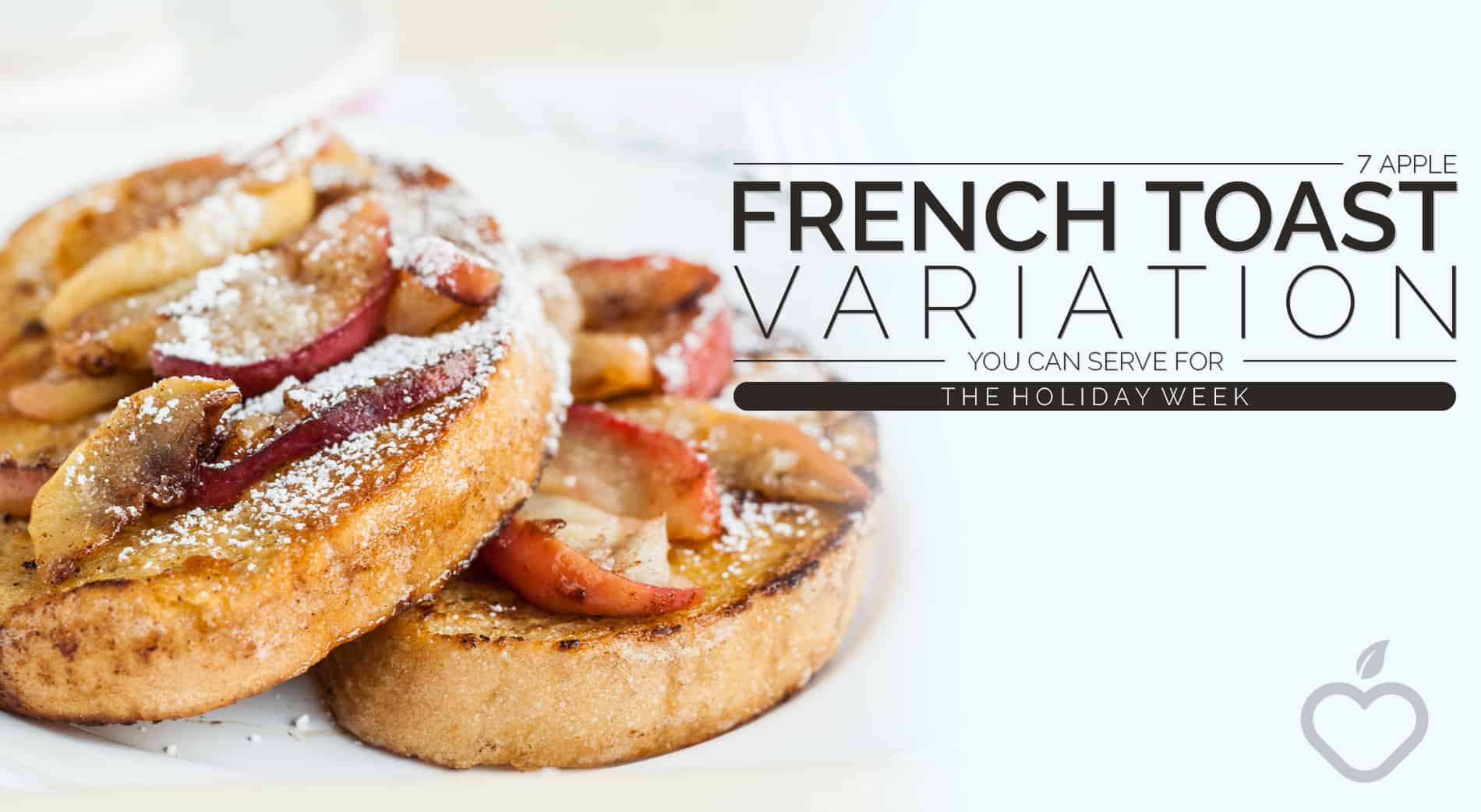 It’s almost that time of year again when everyone wants something different. The kids are off school and your off work for a few extra days, so you just want to make the most of your time together. You want to try out new recipes and find variations of your holiday meals.

French toast is a popular option for breakfast. It’s delicious, full of protein from the eggs, and easy for all to eat. Apple French toasts offer that bit of fruit and a sweeter taste naturally and healthily. But after a while the same recipe repeatedly gets boring. You want to find something that’s fresh and exciting; something that the kids will look forward to again.

This holiday week why not try one of these seven variations. There’s one for each day of the week if you’re wanting to do something special throughout the week. If not, you’ve got a few ideas for other days of the year. 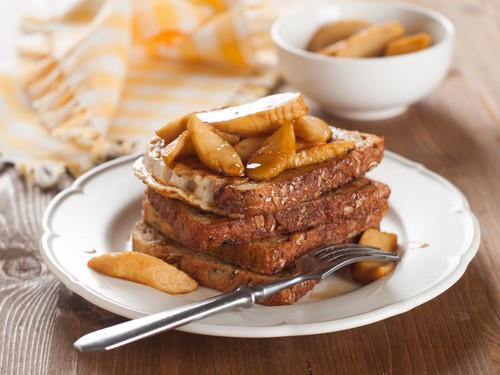 Don’t just opt for apples for your French toast. You can also add a natural sweetness to maple syrup. Look out for pure maple syrup to make sure you get a healthier option for your waistline and your physical health. You’ll get delicious caramelized apples to top your French toast, which you can make on their own for pancakes and more!

You can serve this with a little extra butter or some cool whip if you’d like. Opt for more maple syrup if you have sugar fans in the house. 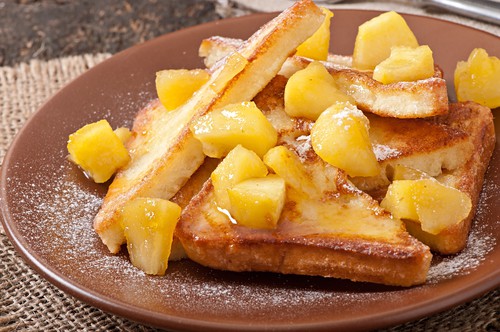 Instead of maple syrup, you can always add more vanilla and cinnamon to your apple French toast. This does call for brown sugar. You want this rather than white for the taste difference to work with the cinnamon and apples.

You can sprinkle some powdered sugar over the top if you want. Alternatively, service with a little extra cinnamon or some nutmeg to complete the holiday feelings. 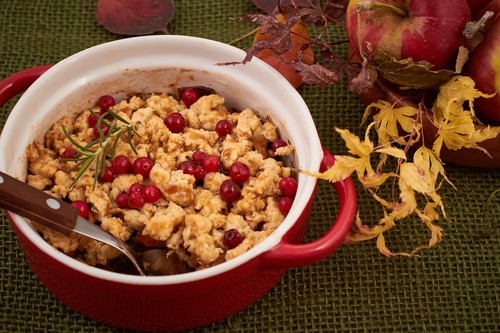 Don’t just make the apple and cinnamon French toast above. It’s time to do something completely different and make a casserole for your family. This will take a bit longer than other recipes, but it’s worth it for something new and exciting. You can also assemble everything ahead of time and bake within 24 hours, meaning you can do the prep work the night before.

Ingredients for the casserole:

Method for the casserole:

Method for the topping:

If you’re going to make this the night before, wrap with cling film and place in the fridge until you’re ready to bake. Otherwise, you can move onto the next steps right away.

Serve with some warmed maple syrup or some cool whip on the side. This is best served on warmed plates to help keep the heat in the casserole.

You don’t need to eat the whole casserole in one sitting. Store leftovers in an airtight container for up to five days in the fridge.

The bread will taste better when dried. Place it on a baking sheet uncovered for two hours at room temperature. You can also place in the oven at 275F for 10 minutes, just to dry out the moisture. 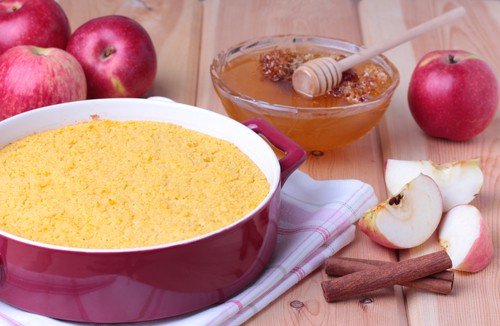 If the previous casserole is something that you enjoyed, you’ll want to try out this option too! It’s extremely easy to make and another that you can prepare ahead of time and then bake in the morning. You can also store leftovers to eat later.

Try to carefully flip your casserole, so you serve with the apple slices on the top. You can then top with a little extra cinnamon or some nutmeg for a holiday taste. 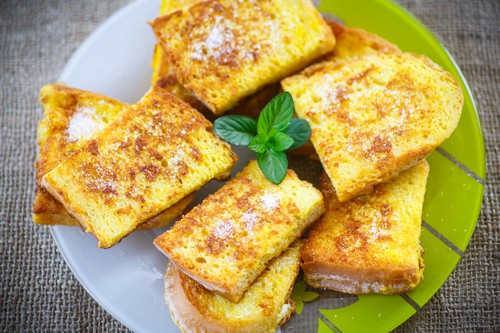 Sometimes you want to do more than just top your French toast with apples. How about stuffing the bread instead? This is a great option for those days when it’s cold and you want to feel warm from the inside. You can also make a banana variation of this if you really want to do something completely different and use up those ripe bananas.

Serve the sandwich the way the kids like, whether in squares or triangles. Don’t forget some powdered sugar and maple syrup for drizzling over the top. A dollop of cool whip is also a favorite for many. 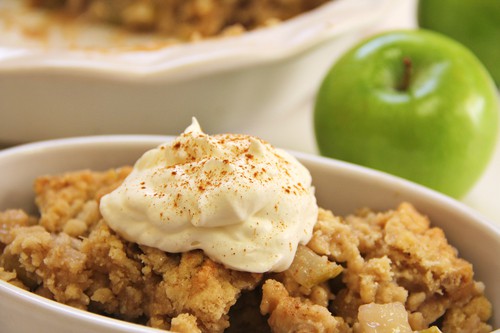 Granny Smith apples have a little extra bite to them, making them popular for baking. This casserole recipe is perfect for the juice, delicious green apples. You can also use them when they’re starting to lose some of their crispiness.

This is another casserole that you can make the night before. Cover the dish before the cooking time and place in the fridge overnight. Make sure you allow it to reach room temperature for best cooking results. You can also store the casserole leftovers for up to five days in the fridge in an airtight container. 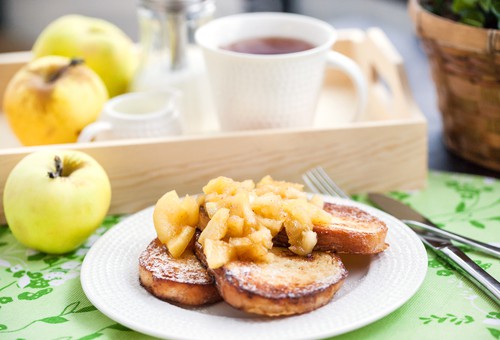 Finally, it’s time for a very simple recipe. This will take 45 minutes to prepare, but it’s delicious and well worth waiting for. It will soon become a family favorite for the holiday season.

Ingredients for the apple topping:

Make the Most of Apple French Toast Variations

You don’t just have to go with the usual apple French toast if you don’t want to. There are so many ways you can make your favorite meals. Some of them will take a few extra hours, but you can do many of the dishes the night before and just cook in the morning. Your kids will love trying something new and feel like they’re being treated to their favorite dishes. You’ll also love having the warmth of French toast on a holiday morning.

8 Holiday Cocktails that Will Never Fail Your Guests