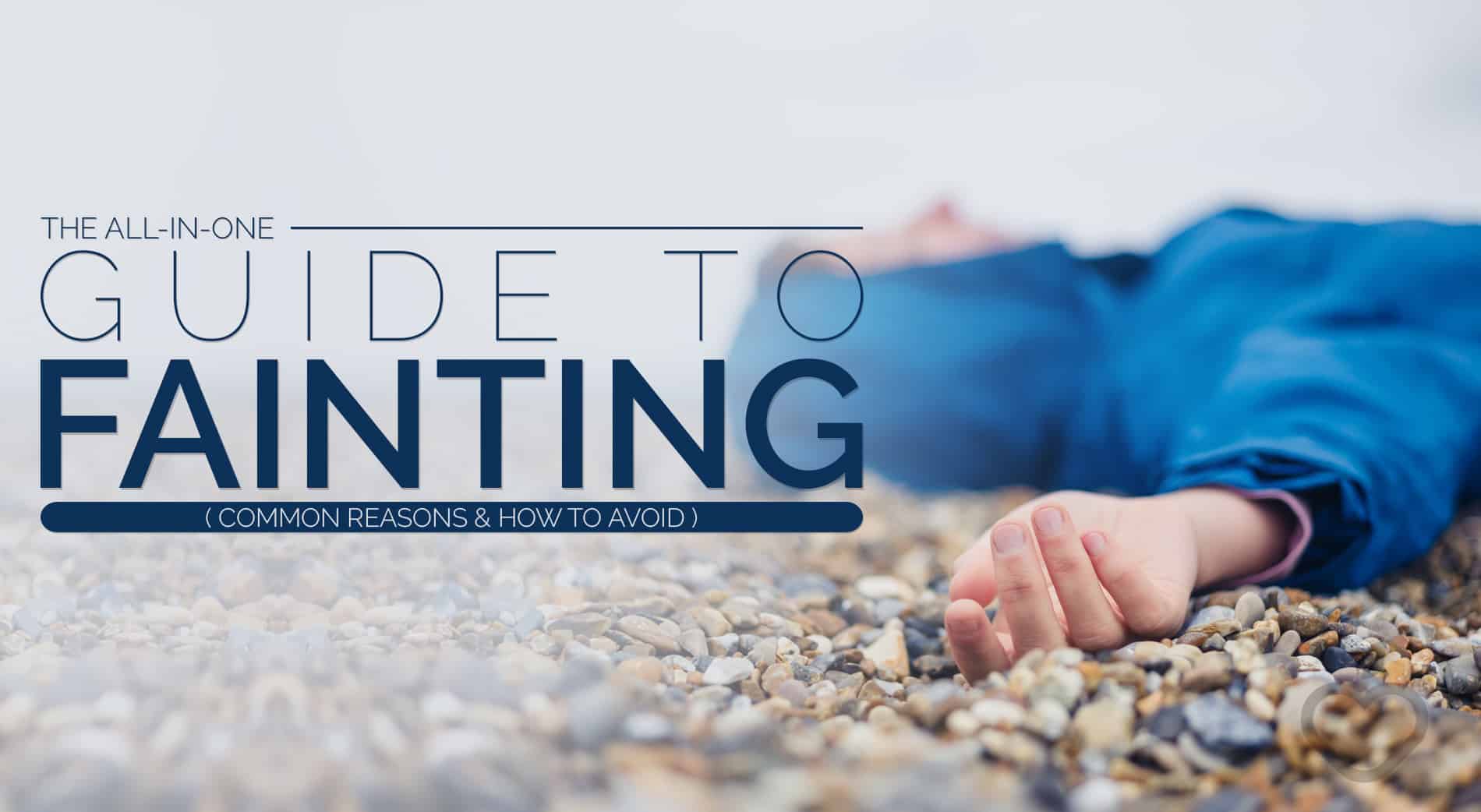 Fainting is also referred to as syncope. The medical definition is when someone suffers a sudden but brief loss of posture and confidence. There’s one reason for it to happen: the blood flow to the brain is decreased, causing the brain to lose oxygen and shut down temporarily.

While there is one specific reason, there are numerous things that can lead to the reason. Some of the problems are medical and will need to be treated. Other reasons are linked to situations. Healthy people can faint every now and then, such as from the sight of blood or due to a trauma.

The majority of people who faint will regain consciousness within minutes and there’s not always a need to seek medical attention. However, this will depend on the cause and the current medical health of the individual. Here’s all you need to know about fainting, including common causes and what to do if someone close to you faints.

The Causes of Fainting 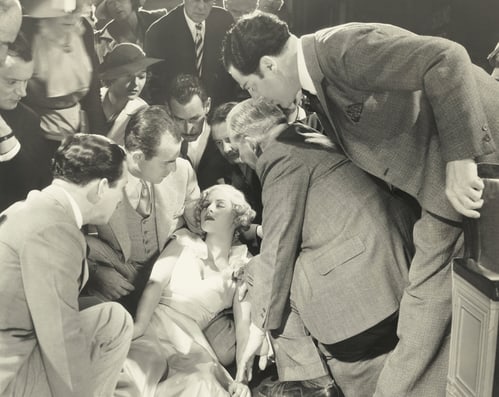 Someone faints when the blood doesn’t get enough brain. This could be due to a “vasovagal attack,” also known as a “neutrally-mediated syncope.”

When the blood pressure drops, and the blood circulations slows, a person has a vasovagal attack. A person will lose consciousness briefly and most of the attacks when someone is standing. Many people suffering one of these attacks with mention a “grayout.” If prolonged, it is possible for a seizure, as the brain struggles to cope with the lower levels of blood and oxygen.

In other cases, a person can suffer from “postural hypotension.” This is commonly seen in elderly people and those who have spent long periods in bed or sitting down. They start to feel dizzy when they stand up too quickly, as their blood pressure rapidly changes. Some of the warning signs of this are dizziness when standing. Most people have suffered from the warning signs and find they have to sit back down and stand again slowly to regulate their blood pressure.

Then there are the medical reasons for fainting. Some diseases and health problems can cause issues for the blood pressure, so the fainting becomes a side effect or symptom of the disorder.

There are various types of diseases that can affect the blood pressure. The most common include chronic post-ganglionic autonomic insufficiency and acute dysautonomia. There are other symptoms such as bladder and bowel control problems, decreased sweating and problems with salvation and tearing. Your doctor will need to help you manage the condition to reduce the fainting side effect.

Other nervous system conditions can also lead to fainting spells. They aren’t quite diseases but can lead to major health problems. Diabetes is one of the most common issues. People can’t regulate their blood sugar, which can lead to changes in the heart rate and blood pressure. Amyloidosis and alcoholism also cause a problem.

A poor diet or lifestyle choice can cause issues with the blood pressure. Malnutrition and dehydration are concerns for many doctors. When you don’t get enough nutrients or water, your blood pressure drops and you’re more likely to faint. Those who don’t eat regularly can feel weak and dizzy and are more likely to temporarily collapse.

Nerves stimulation pattern problems are another common reason. These are usually medical conditions that your doctor will need to help cure or manage. Some people faint after and even during urination, as the nerves in the body, react unusually. There are some who faint due to intense bouts of coughing and others who faint from stretching their neck and arms.

If you have a problem with your heart or blood vessels, you are also at risk of developing a fainting condition. Irregular heart rhythms affect the amount of blood that gets to the brain. You can have a heart arrhythmia, a sinus node problem, and even a blood blot within the lungs. Doctors have also found that problems with the heart structure or narrow aortic heart valves also lead to fainting spells.

You will need to talk to your doctor if you’ve been diagnosed with any of these heart problems. Doctors will often prescribe medications or recommend surgeries to fix the heat issues.

Anxiety attacks and hyperventilation are also common reasons for fainting. These can be from long-term mental disorders or you may just have temporary periods of shock or anxiety. Hyperventilating leads to the body getting too much oxygen and then releasing too much carbon dioxide in a short space of time. The brain doesn’t get enough to keep the regular patterns, causing it to shut down temporarily.

This can be due to an anxiety disorder, which you should arrange medical help for. There are both natural and medical remedies. Another reason could be due to shock or surprise. You may be scared of a situation or nervous. It’s not usually in your nature to be like this, but something has caused your mind to race.

Temporary anxiety could be due to a specific trauma. This is often known as shock and people faint because of the sudden change in blood pressure.

Severe pain and exercising too hard are other common reasons for fainting. When the body is in pain, it increases the stress hormones. This directly affects your blood pressure. On top of that, the pain can cause unusual patterns in the nerves, which react within the brain and leads to being lightheaded.

Exercising for long periods of time will also affect the blood pressure. This is extremely common if you exercise in hot temperatures. Heat stroke is a major concern, especially for those who don’t drink enough fluids throughout the day. The electrolytes are off balance due to sweating and not being replaced.

You may also have a family history of fainting. This is often linked to a blood pressure issue, which can be diagnosed and managed. If you do have parents and siblings who faint, you will want to look out for symptoms that you could have the same issue. 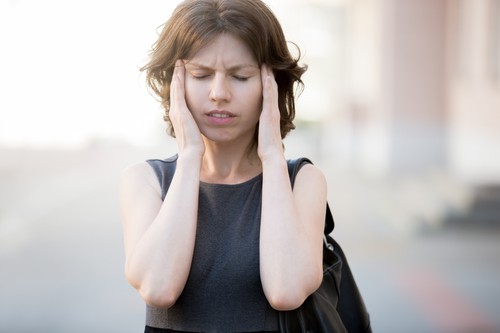 You will then need to make a few changes to your lifestyle. Make sure you eat regularly to avoid increases in your hunger levels. Drink plenty of water throughout the day to avoid dips in your hydration levels. Don’t forget to eat a balanced diet and focus on nutrients to keep your electrolytes balanced and manage your blood pressure levels.

If you suffer from dizziness when your blood is drawn, let your doctor know. While you will still need to have blood drawn, your doctor can take steps so you don’t see it. Most issues are at the sight of blood, causing an increase in adrenaline. Getting rid of the visual aspect helps a lot of people.

Those who stand up too quickly and feel dizzy can take steps to adapt. When moving from a lying or seated position, make sure you move slowly. This is especially important if you’ve just had blood drawn or given blood, as your blood pressure naturally changes.

Understanding the signs that you’ll faint is another way to prevent it. Those who are about to faint usually experience:

They can also become pale and cold to touch, as the blood pressure changes and the flow are restricted. If you feel the symptoms or someone thinks you look pale and could faint, sit down right away. Place your head between your knees to help increase the blood flow directly to your head. You can also lie down to help increase the blood flow in the right direction. Lying down will help to prevent falling off the chair if you do faint.

Don’t get up before the symptoms disappear. When you do stand up, do it slowly to help support the blood pressure levels.

What Should You Do If Someone Faints? 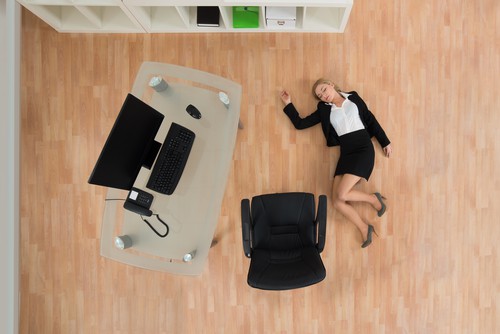 If you’re close to someone who faints, you’ll want to take steps to increase the blood flowing to the head. The best way is to lie them down and place their feet above heart level. If they’re conscious and say they feel faint, you can sit them down and get them to place their head between their knees. This helps to prevent them from physically fainting and hurting themselves.

Make sure all tight clothing is loosened. This is also something you can do when you feel faint. Tight collars and clothing lead to a restriction of the blood flow. Loosening can instantly help to relieve some of the pressure.

When someone is conscious, you can have them drink some cool water. Make sure others stand back, giving the person some air and not to feel anxious or worried about their symptoms. Don’t give water to someone who isn’t conscious!

Most of the time, you won’t need to call a doctor. Fainting is something that rectifies itself unless there’s a medical reason for it. If you know there’s a chance that it’s a medical condition, phone for an ambulance to play it safe. You should also call for an ambulance if the person isn’t breathing, doesn’t wake after a few minutes, or has injured themselves in the fall.

If someone is pregnant, has an irregular heartbeat or is diabetic, they may need immediate medical attention. It’s best to work on the side of caution in these cases. Even if there is no history of medical issues, if someone complains of chest pains before fainting or feeling the symptoms, call for an ambulance.

Those who are confused afterward or have difficulty in speaking will also need medical attention. This could be a sign of a stroke or another issue within the brain. If they cannot move their limbs, call an ambulance immediately.

You may need to perform CPR if the person isn’t breathing. If you’re not sure how to do this, most dispatchers will be able to talk you through it while waiting for the ambulance but call someone trained in first aid if there is someone around.

Fainting is common. Those who don’t have a history of fainting or don’t have medical issues can suffer from bouts. There are many things that affect the blood pressure levels. The best thing to do is take steps to avoid fainting, which means knowing the early signs to take steps to avoid the loss of consciousness.

If you do have a loved one who suffers from blood pressure or heart problems, understand the physical early signs of fainting. You can help to reduce the risk of loss of consciousness.

10 Health Benefits of Almonds During Pregnancy