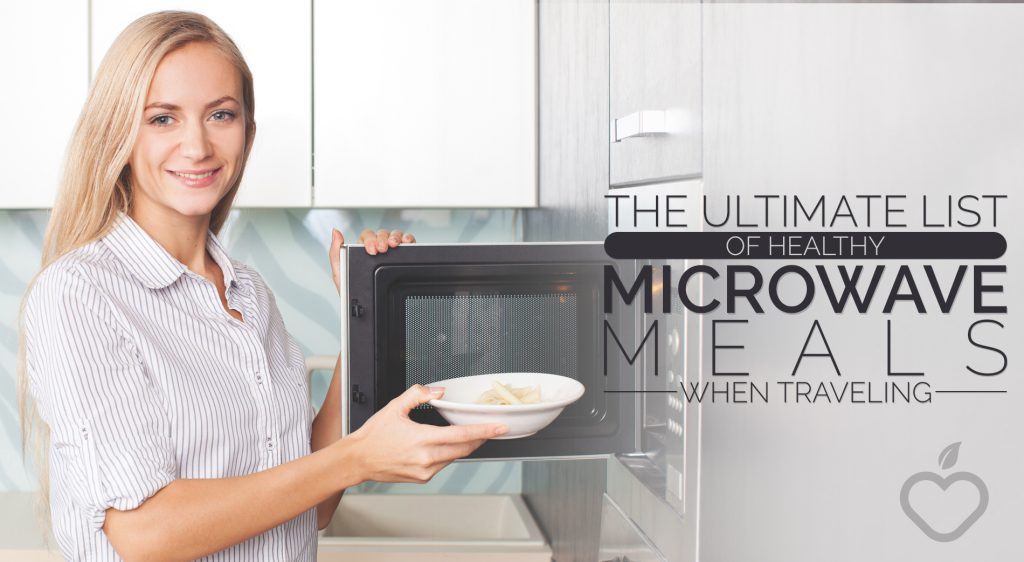 We hear all the time that microwave meals are unhealthy. There is some truth in this, but that doesn’t mean you must avoid them all. When traveling, the right microwave meals can be perfect for your needs.

But where do you start? Just which microwave meals should help you avoid and which ones are the best for your needs?

I want to start this by saying that microwave meals do not need to be pre-made in store. The term microwave meal just means that you can pop a cold meal into a microwave to cook it through. There’s a common misconception that you must get them pre-made from a store rather than make something you.

Stating this will likely change your mind on that view that all microwave meals are unhealthy. You may start to guess now that there are plenty of options that are easy to cart around while traveling and heat up when you get to your destination.

Bulk Make All Your Own Dinners 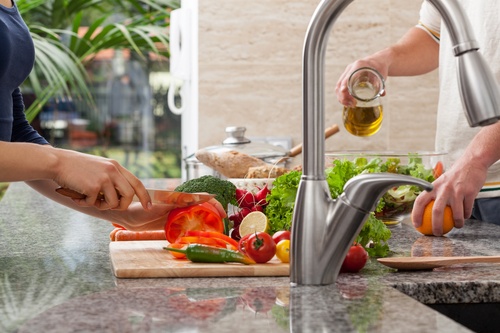 This is usually your precursor to the ultimate list of healthy microwave meals. However, there are microwave meals from scratch available, too. Instead of making just enough for the whole family at that meal time, you want to create extra. You want to bulk make your meals, so you have enough to store in the freezer or even in the fridge, depending on when you need them. You then just pull out the meal and take it on the go with you.

If you are going to take it out of the freezer, make sure it has completely defrosted before you cook in the microwave. If it hasn’t had the time, you’ll need to cook for longer to make sure it is piping hot the whole way through. This just helps to avoid any bacteria from the meal during the reheating process.

When you bulk makes your dinners, you have much more control. It’s highly advantageous for those who live alone or as part of a couple. Most recipes you find will serve four. Instead of halving the recipes, you can make the full amount and store the extra portions for another night. When you get in from a long day at work, you have something to just throw in the microwave or oven to reheat.

There are times that you can plan for traveling. You know that you’ll need something quick and easy to make at the other end so you can bulk make a dinner earlier in the week or in the month and have it ready for yourself. No, having a microwave meal doesn’t mean that you’re lazy. It just means that you need something quick and simple. We have busy lifestyles, and healthy meals need to fit into that otherwise there are high chances that we won’t stick to a healthy and balanced diet, right?

But which dinners are going to be better for you? Well, this is where our ultimate healthy microwave meal comes into play.

Start with a Homemade Bolognese 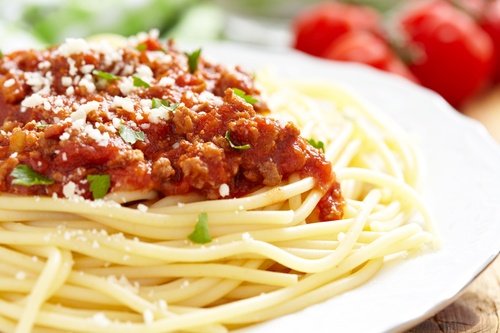 Spaghetti Bolognese is one of the most popular microwave meals on the market. The problem with the ones that are in your stores is that they’re full of added salt. They also have added chemicals that you just don’t want to put in your body. You’ll find they contain far more calories and unhealthy fats than your own version would have.

Homemade Spaghetti Bolognese is one of the easiest options to make in the home. You don’t need a lot of ingredients, and you can make bulk portions extremely easily. The only ingredients you need are:

If you want to add other vegetables in you can. Green peppers tend to work well. You can also throw in some garlic and season with salt and pepper to taste. Some people also add a splash of red wine to their Bolognese sauce or maybe some hot sauce for an extra kick. The choice is completely up to you.

For those who use a lot of liquid, make sure you allow the sauce to thicken, by leaving the sauce on the heat for longer.

Lean mince is the best option when making this meal. You won’t have to drain as much fat off!

When you bulk to make the pasta, you’ll have to store the meal in the fridge. Pasta just doesn’t work that well when reheated from frozen. If you do want to store the sauce in the freezer, you can make the pasta while cooking the sauce in the microwave. It will take about 10 minutes to fully cook the mince through in the microwave, especially from frozen.

Update to a Lasagne 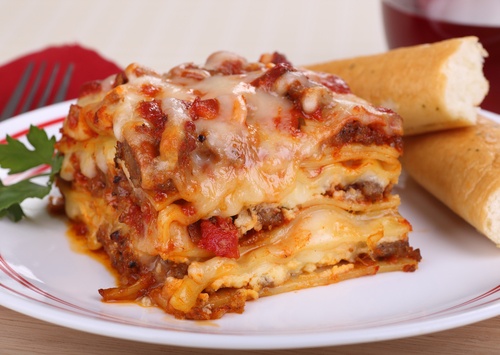 Once you make your Bolognese sauce, you can use it as a lasagne. You’ll need some lasagne sheets and will need to make a white sauce for the layers between the sheets.

This is something that you will need to fully cook in the over and then store for later use. The good news is that it can be stored fully in the freezer. Once lasagne sheets are cooked, they can be frozen, and you’ll barely taste the difference.

Try to get lasagne sheets that don’t require pre-soaking or cooking before making your dish. 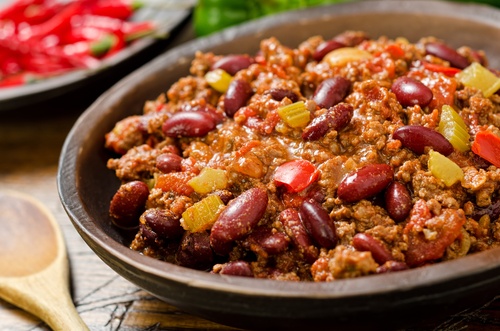 The next meal to add to your freezer is a homemade chili. Again, this is a dish that is extremely easy to make in bulk, and the whole family will enjoy it. You can make your chili as spicy as you want.

You’ll use many of the same base ingredients for your chili as you did for the spaghetti Bolognese. You may want to take out the mushrooms, as the kidney beans will replace it. You can also add other types of beans, including black and white beans, to your chili for a little extra protein goodness.

Don’t forget about the spice. If you want to lose weight, extra spice is good for the metabolism. However, you’ll want to work for the whole family. You can add extra spice to your microwave meal if you decide that it isn’t right just for you.

When you make this with rice, you’ll be best storing in the fridge. However, rice can be frozen. It doesn’t taste as good as it would be fresh, but it does make an extremely quick and easy microwaveable meal. Rice takes longer than pasta to cook through, and you don’t want to wait around for it, right?

Try Your Hand at a Chicken Curry 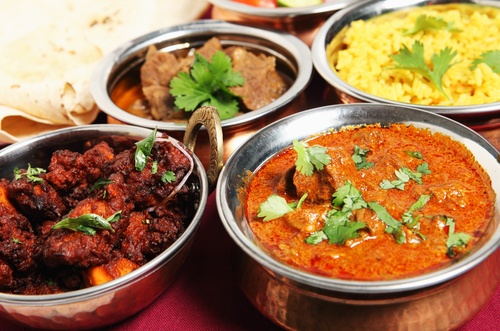 Curries are another popular microwave meal. They can be healthy, but it will depend on the type of curry you make. Kormas, butter chicken, and other creamy options are the ones that you want to avoid as much as possible. It’s worth considering the tomato-based sauces instead. Tomato-based sauces don’t have the cream, which causes the extra weight gain.

A chicken saag is an excellent chicken curry to try out and doesn’t require a lot of skill. It’s not one of the quickest to make at first, but you can bulk make it with easy and then freeze it or keep it in the fridge.

Like with the chili, you can freeze the rice with the chicken saag if you want a quick meal ready for you later in the month. If you’re going to eat it within a week, it’s better just popped in a tub in the fridge. 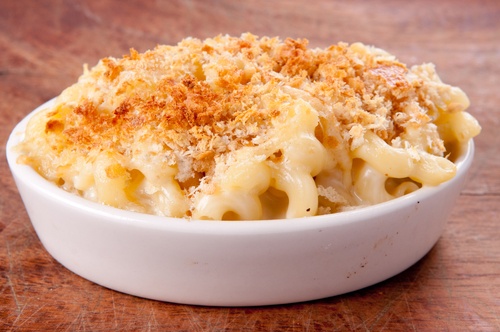 You can make your microwave meals from scratch when you get in from your travels. This cauliflower mac and cheese is just one example of those types of meals.

I know this sounds a little strange. Really, this is just cauliflower cheese, but you will feel like you’re having a full meal. You can pad it out with all sorts of vegetables to create a quick and simple meal to eat in minutes. It’s more of a fake mac and cheese because the cauliflower replaces the macaroni. Every now and then there’s nothing wrong with replacing your pasta for some vegetables, especially after you’ve been traveling.

You’ll need a dish that is suitable for the microwave and has a lid.

Some of the best vegetables to use in this are tomatoes, spinach, and peppers. They work extremely well with a cheese sauce and offer a range of nutrients, working in with the cauliflower benefits.

Create an Omelet in a Mug 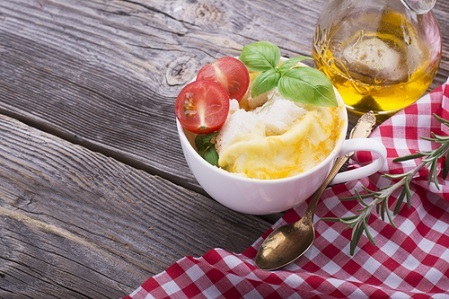 The cauliflower and cheese aren’t the only meal that you can make from scratch in the microwave. It’s time to enjoy a healthy omelet any time of the day, without making a mess of the frying pan. You can do this in one of your favorite mugs.

Make sure the mug is microwave safe. There are plenty of people who have shared how their mugs have exploded after being in the microwave. If you’re not sure if the mug you did just use was microwave safe, leave it in the microwave for a few minutes to allow it chance to cook a little. If it’s going to explode, it will do it then!

You’ll have an omelet within 5 minutes. Perfect for after your travels, right?

You’ll likely want to leave the mug to sit for a few minutes anyway. The mugs withhold the heat from the microwave.

Raspberry Oatmeal in a Mug 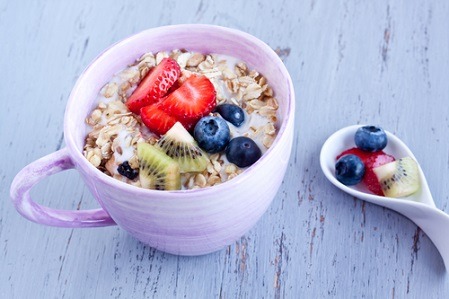 Another mug friendly meal is oatmeal. This is a healthy carb that can be mixed with a range of ingredients. You’ll feel like you’re eating something unhealthy, but it’s the best for when you get in from a long trip or even just a bad day at work.

This recipe is also excellent with other fruits. Bananas and blueberries tend to be the best option. You can get a packet of frozen mixed berries if you really want to top up some antioxidants you get in a day.

Try out some nutmeg instead of cinnamon if you want a slight Christmas-y taste to this recipe later in the year.

Which Microwave Meal Will You Try First?

Microwave meals don’t have to be healthy. I know you’ll think they do, but that’s because the common misconception is that you must buy the pre-made ones from the store. They are full of added salt and chemicals.

You have full control when you make your own meals. There are plenty of ideas above, whether you want to bulk make your dinners or opt for something fresh and quick when you get in from your travels.

Make sure you have some tubs and mugs that are microwave safe. They’ll not only avoid too much heat withheld after microwaving, but they’ll also be safer as there won’t be the risk of them exploding.

Have fun with your microwave meals and tell us which ones you’ll try first.

What to Eat Before, During, and After Running – Infographic

7 Natural Ways to Fight Off the Flu – Infographic