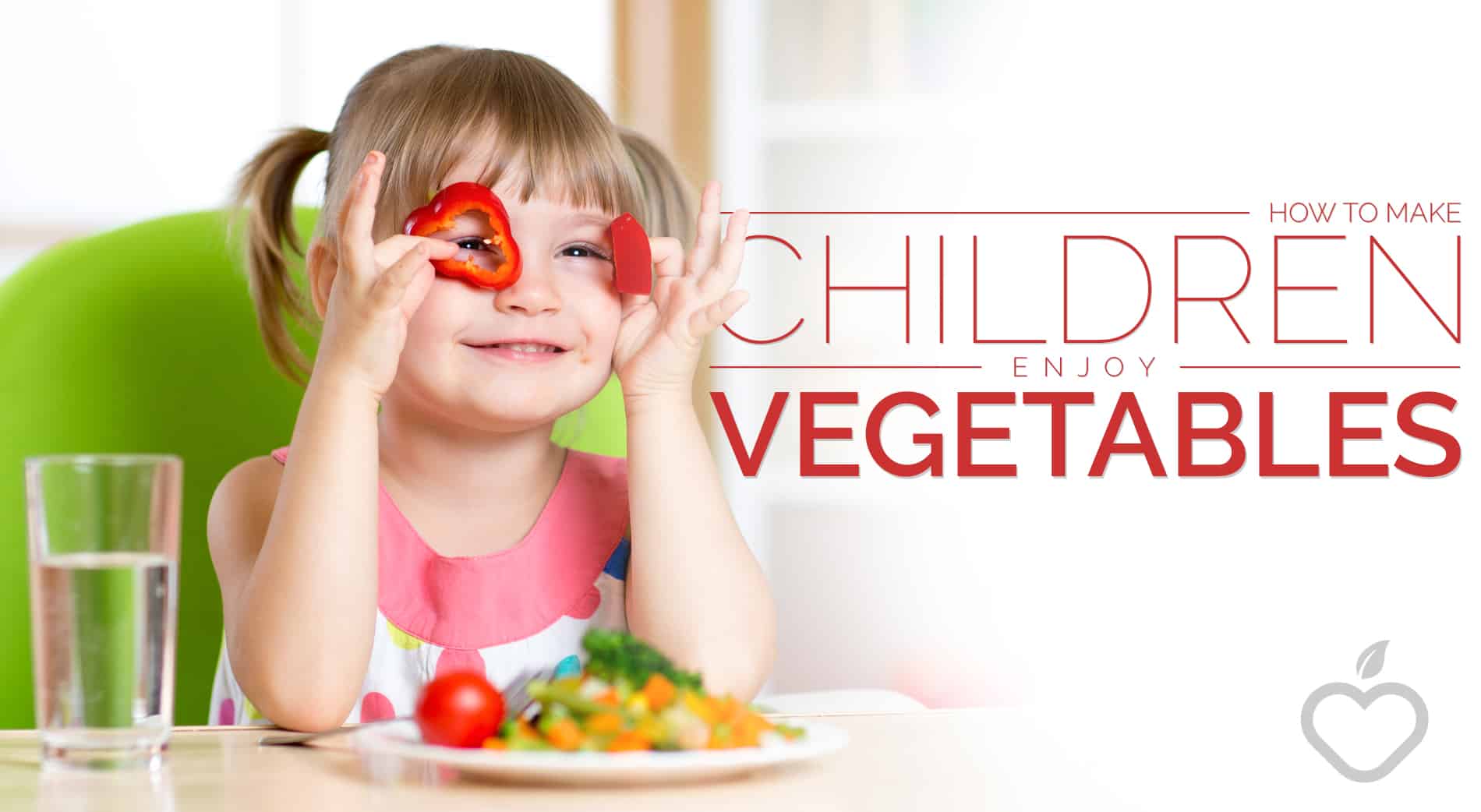 When children are just trying out food for the first time, they are likely to love the vegetables you put on their plates. Vegetables are bright and colorful, catching their attention to make them interested. If something looks dull or boring, they are just not going to be interested in eating it.

However, as children get older, they notice your aversions. If they see you not eating your vegetables, they will follow suit. They also notice the foods their friends like and dislike, while developing their taste buds for other foods that they try. Soon, they start turning away from the foods that they once loved. 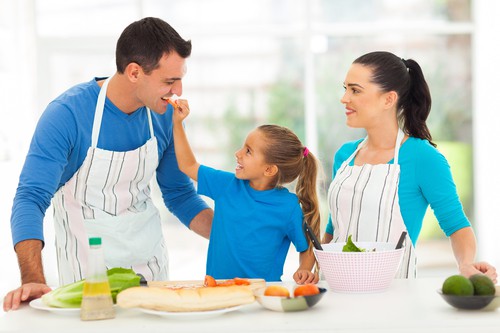 Children develop their likes and interests from you and other adults around them. If you show them an aversion to foods, they are going to get the idea that the food is not that great. They form a dislike for the food before they even try it. They are not as likely to allow the food to pass their lips since they are so certain it will taste bad.

Leading by example is important. Moreover, you need to encourage the other adults around them to follow suit. While you may not actually like food, it is worth showing that you are willing to try it. Just try not to pull a face while you eat. If you cannot do that, then choose vegetables that you do like. Show that they are good and make a point of trying something new. Kids will then follow suit.

You can also encourage older siblings to help with this. Many younger siblings will look to see what their brothers and sisters are doing or eating. If they see their siblings have no interest in food, they will view that food as the Devil. Even if you do show you like it, you can fight a battle from an immediate disadvantage. 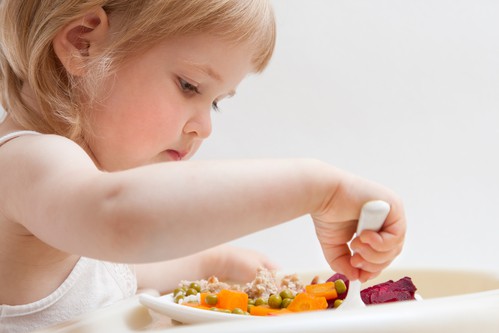 On top of that, they are not going to ask for something they do not know about. They know yogurts and candy may be in the fridge, but they have no idea about the cherry tomatoes, cucumber, carrot sticks, and more. You need to change what they think about for snacks and meals.

You can do this by letting them know about all the options available. Let children see the vegetables that you are cooking. Make it clear that the food is good for them and tastes good at the same time. Put the positive thoughts into them before they try the food. That way they are more likely to try the food later.

Asking for the food is even a possibility. They want something that you are positive about.

Rather than saying “I do not know if you will like it,” try something like “this is knowing, and I have heard it is delicious” if you want to give them some warning. This helps them understand what they are looking at on the plate.

However, the best thing to do is not to say anything at all. Avoid drawing attention to the food, and you will find they are more likely to enjoy it. Do not make a big deal about them trying the vegetables while they are eating it. This still draws attention to something you were not sure about. Wait until they have finished and then mention something. Just let them know what they have tried.

After they have finished, they may ask what the vegetable was. They want to know what they have enjoyed.

If they do ask what the vegetable is beforehand, just say the name in a matter-of-fact way. Do not make them worry about the taste any more than they already do. Show yourself trying it and keep any fear or apprehension you have about them liking the food.

Get Them Involved in the Cooking 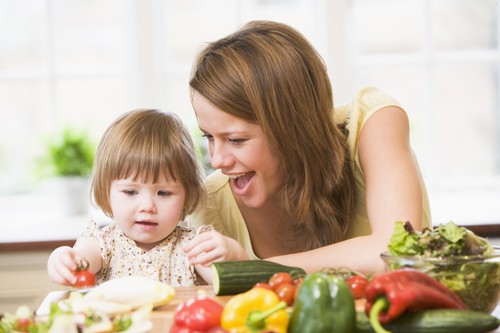 Quite honestly, one of the best ways to get children to enjoy their food is to get them involved in the cooking. They can do this from being babies, even though they will not physically do anything.

Think about how children love to eat the cakes and cookies that you make. They enjoy the baking process, and they look forward to trying out their masterpieces at the end. This is the same case with cooking dinner.

Start by getting them to mix or give them a piece of vegetable to chew on while you cook. They get a taste for the item before you put it on their plate. You can also talk to babies and show them what you are doing. As they get older, they will want to know more about the cooking process and help you in other ways.

One of the biggest benefits of getting children involved is that they get to see what is put into the dish. They know what to expect when they sit down for their meal. They have an idea of all the ingredients used. Kids expecting mac and cheese will not be too surprised to see some peas or broccoli thrown in there if they have seen you add it. Those that are expecting their chicken nuggets will not be put off by the chopped carrots and cauliflower going with their meat.

Get Them Involved Before the Cooking

It is not just during the cooking that you can get kids involved in the picking process. Why not get them involved in the supermarket? Let them choose the vegetables that are getting added to their meals. When they have a choice, they are more likely to eat it when cooked and put in front of them. They want to know what their choices taste like.

Limiting the choices is good when they are babies. Too many choices are overwhelming, and they are more likely to turn down all vegetables instead of picking one or two. When you give them a choice of two out or three, they find it easier to pick from the list. They are more comfortable, and they are going to be happier with their choices. You can also limit to just two options at a time to choose from. For example, ask them to choose broccoli or cauliflower and then at a later part in the store ask them to choose between potatoes or sweet potatoes, and so on.

Another way to get them involved early is through gardening. Grow your vegetables in the garden and let your children see where they come from. They will be amazed at how a seed can turn into food. Get them involved with the watering and checking of the vegetables and they are more likely to want to eat their hard work.

Encourage One Bite at a Time

Just because a child initially rejects a vegetable does not mean they do not like it. Many parenting experts have found a child needs to be exposed to a food 8-12 times before they can say they do not like the food. Their taste buds need the chance to develop to the taste. Some foods are harder because they are bitterer. For example, spinach and kale can be too much when younger, but they will like it as they get older.

However, you do not want to force the 8-12 tastes on them in one sitting. Encourage one bite at a time. When they get the food put in front of them, encourage them to take one full bite before they can leave it. It needs to be a good amount so that their taste buds get the chance to taste the food.

You may find that they realize the vegetable is good. However, some will decide after that one bite they do not like it. Do not give up just yet!

The next meal, serve the same vegetable again. You want to encourage the one bite rule again. They may tell you that they did not like it the first time, but encourage that one bite to make sure. The more they try the food, the more their taste buds will develop and change. They may realize that they liked it all along.

If after 8-12 attempts of getting them to try the food they still say they do not like it, they may genuinely not like it. This does not mean all vegetables are off the table. Move onto the next one on the list.

Do not just give a child a food of vegetables they have never tried, or they think they do not like. They will look at that plate as a meal of disgust. Instead, you want to encourage them to try the new with the stuff that they do love. They know that if they do not like the new food they have something to fall back on.

Most children will save the food they love the most to last. They might as well get the food they are not sure of out of the way and then finish the meal with something that will get rid of the bad taste out of their mouth.

Only give them one new vegetable to try at a time. This helps to avoid feeling overwhelmed. Once they like the vegetable, you can add it to their rotation of delicious foods.

Get into a Good Meal Routine 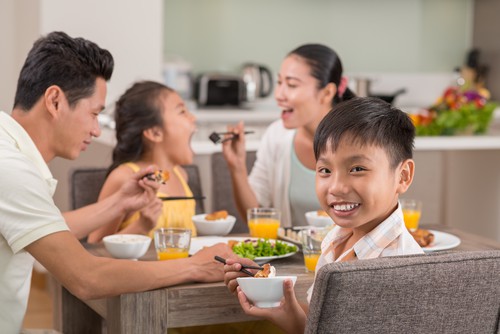 There is no point forcing them to eat something. Not only does this put them off the food even more, but it also encourages overeating. Instead, you want to look at why they are saying they are full. Is it possible that you need to change your meal routine? Do you need to reduce the number of snacks your children are eating?

Do not be afraid to change the routine completely. Opt for three meals a day, with two snacks placed in between the meals. Set a schedule and stick to it as much as possible. Space out the meals and snacks equally throughout the day, with a long fast overnight while they sleep. By being hungry at meal times, they are likely to try whatever is on the plate.

Reward them for Their Good Behavior

Forcing them to eat their food is not going to help, but you can encourage. Rewards for good behavior are one of the best ways to encourage children to eat more. This does not mean they need to get a dessert after every meal. We are not talking about treats here. Sticker or star charts are great, especially for younger children. You can also reward through pocket money.

Do not make the big reward at the end of the week reliant on getting a sticker every day. There is going to be days that you do not serve something new or a day when they are just not hungry. If they believe they need to be perfect throughout the week, they are going to see it as an unachievable goal. Missing one day means they have lost out instantly. By dropping to four or five stickers out of seven, you give them some leeway for an off day.

You can help your children like vegetables. While it can initially sound like you are manipulating their thoughts, you have just helped them to change their mindset going into trying new foods. You have opened their minds enough to believe they may like something new.