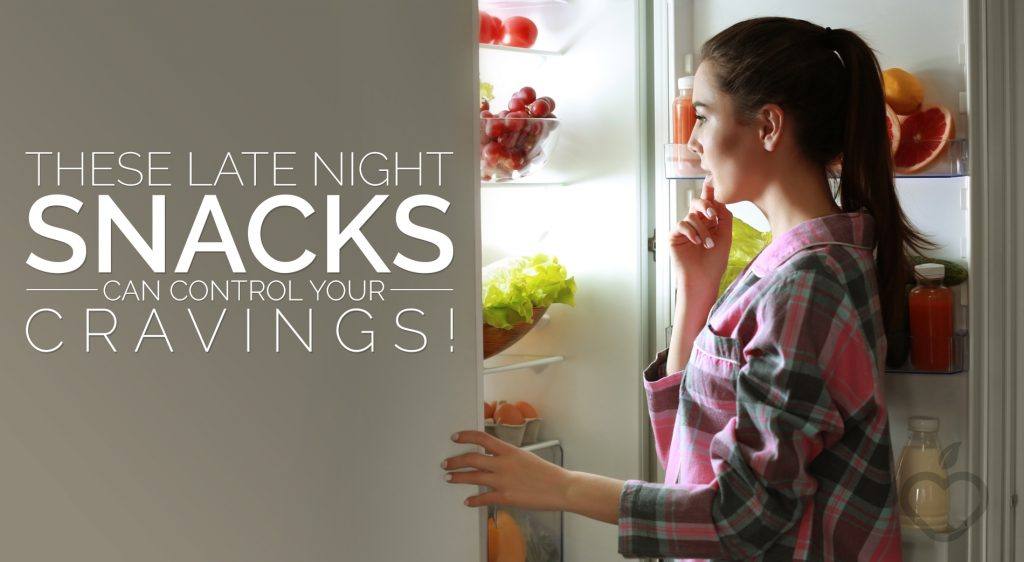 You aren’t just what you eat, but when you eat it, too.

Some of the best dieting advice, long before you need to start thinking about calories or food groups, for sustained energy while losing weight is to eat a king’s breakfast, a commoner’s lunch, and a pauper’s dinner. The reason for this is that food energy you can’t use immediately, or within a few hours, will automatically be converted into fat. If you look at things simplistically, that fat would be converted into energy when you need it later, right? Unfortunately, this is not usually the case: your body is hardwired to preserve that fat for if possible, just in case there’s a famine around the corner. Rather than dip into its reserves, it will trigger hunger signals and cause you to eat once again.

Your metabolism (the rate at which your body burns calories) is highest in the late morning, and early afternoon, when you are utilizing the energy from the breakfast and lunch, you’ve recently eaten. However, as the sun goes down, your bodily processes slow and there’s less demand for immediate energy. Since you’re not using it up, whatever energy value your body can extract from digesting dinner and subsequent snacks goes into the formation of new fatty tissue. Weight gain isn’t the only effect, unfortunately: further results can include higher blood pressure and cholesterol, blood sugar and insulin problems and insomnia. This mechanism has been demonstrated repeatedly in controlled studies. 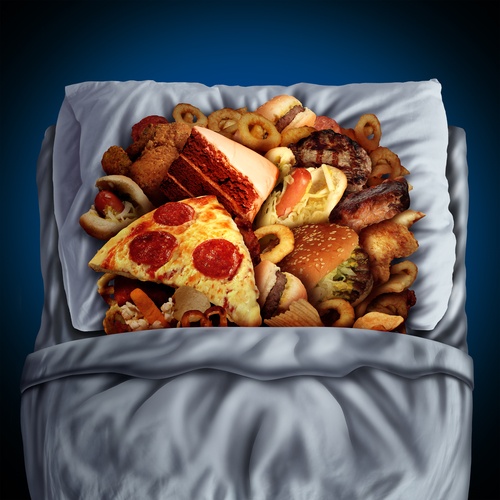 In traditional Oriental medicine, each organ is associated with a time of day during which it is most active ad uses energy at the highest rate. Scientists are increasingly embracing a parallel view, though they tend to express the same idea regarding changes in the endocrine system caused by genes “switching” on and off at different times. Interestingly, in the Chinese system, organs associated with digestion and the extraction of nutrients are working hardest between 7 and 11 a.m. 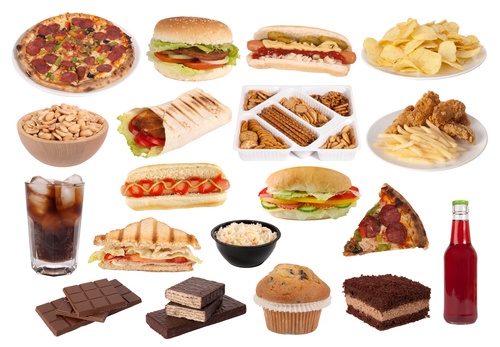 Almost every nutritionist will advise you to eat a small dinner, early in the evening. Also, since you probably won’t be needing masses of energy soon, it’s a good idea to limit the amount of rapidly digestible foods rich in energy. Refined carbohydrates and sugar fall into this category.

How easy this is to achieve varies depending on your lifestyle (and, let’s be honest, your level of self-discipline). For all of us, though, it’s just that much easier to stick to a planned, healthy diet during the rest of the day. From the time, you wake up and brush your teeth, go to work and start dealing with the day’s challenges, you’re generally following a routine. When the workday is over, it’s easy to see the hours until sleep as “me time,” and one way we tend to enjoy ourselves is by eating delicious food.

Dinner, in most countries, is a much more social occasion than breakfast or lunch. If you’re going out or dining with friends or family, the time it’s served tends to be later at night just so that everyone can make it. The amount and type of food served is also reflective of a social occasion, so that you’ll tend to go to bed still full and flood your body with unneeded calories throughout the night.

Even if you’re spending the night alone, it’s easy to fall prey to nocturnal overeating. You may be feeling bored or frustrated, or be in the habit of munching on a few sweets after dinner or while watching television. Overall, it’s just the most natural thing in the world to stand up and say: “I have Netflix and I want a cookie!” It’s called comfort food for a reason, but there’s no reason to pick out a snack that’s packed with sugar, fat, and starch.

This article will offer some healthier alternatives that you can make yourself without pretending to be a chef, in most cases with less than five minutes of work. They’re suitable for entertaining a group of people or to just enjoy by yourself, and every one of them is a hearty alternative to the rubbish that 90% of people stuff themselves with after dark. 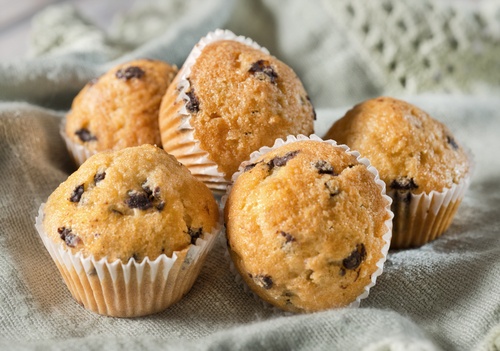 Most people will associate muffins with breakfast, or worse, think of them as something that comes out of a cellophane packet. In fact, they are ridiculously quick, inexpensive and easy to make and are a great snack at any time of day. Baking a dozen requires no more work than doing one, and simultaneously sorts out the whole family’s snacking needs for the next day.

Since the only work you’ll be doing is mixing stuff together, fresh baking muffins takes almost no effort, while you can spend the time they’re in the oven answering email or whatever else needs to be done. Although they contain carbohydrates, using whole grain flour means that these are not empty calories, but contribute needed nutrients while digesting slowly.

Turn the oven on to 200°C (400°F) to start heating up, which will take 15 minutes or so. You can make the technique of this recipe more complicated if you want, but things will generally turn out okay if you just mix everything together until you get a batter that’s smooth and without any clumps or patches of dry flour.

Fill the muffin cups 2/3 of the way to the top and toss the baking tray into the oven; how easy was that? Leave them to bake for about 20 minutes, which should be enough to let them puff up and get an appetizing color on top. Test that the center is done by inserting a toothpick: if the toothpick doesn’t come out clean, leave them to cook for a few more minutes. Let them cool in their moulds for a few minutes, and they’re ready to eat.

The humble muffin is infinitely versatile. Although very watery fruits like watermelon or oranges won’t work, you can substitute the frozen berries above with almost any chopped fruit, whether dried or fresh. If your sweet tooth is all sugared out, use the above recipe as a starting point but omit the sugar and fruit and add grated cheese and bits of bacon or salami for a savory treat instead. 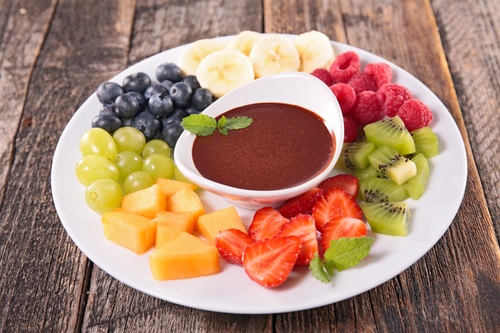 If you have friends over to watch a sporting event or a movie, your automatic impulse might be to buy a couple of bags of potato chips or other fried snacks. Think about this choice for a moment: you’ll be paying top dollar for what is essentially corn or potatoes with salt on them, and this is their best feature. The frying oil in the factory is used for extended periods, meaning that much of it turns into extremely unhealthy saturated or trans fats. Look at the nutritional information on the back and see how much oil your favorite chip contains; it’s usually from 20% by weight upwards. How many of the chemical additives do you recognize? I’ll give you a hint: silicon dioxide is usually associated with beaches and deserts (it’s sand!).

A way more elegant way to keep people munching and entertained is to offer a selection of healthy snacks along with some dipping sauces. If you’re alone, you might want to prepare only one sauce and snack, but a whole bunch of colorful food surrounding bowls of different dips will keep people stretching towards the coffee table, and nobody is going to complain about the lack of sodium.

Foods for dipping you can buy ready-made:

All the above tend to be healthy foods and offer a huge variety of textures and flavors to be complimented and combined with the dips. The problem with buying ready-made dipping sauces, though, is that anything that comes in a packet tends to contain the maximum amount of fat, sugar, and salt since this is the easiest way for the manufacturer to add flavor. Making your own is not hard, though, as you’ll see:

Chive Dip: Chop fresh chives until you have a cup full, then stir in 2 tablespoons of lemon juice, salt to taste and a cup of sour cream.

Satay Sauce: Mix a cup of smooth peanut butter, another of coconut milk, two tablespoons mild curry powder and enough water to make a smooth sauce. Not the traditional recipe, but perfectly adequate.

These dips may seem fattening because of the cream, but you would tend to eat only a tiny amount of fats far healthier than you would find in most store-bought snacks. Also, your guests will think you’re a culinary genius for knowing how to stir things in a bowl.

It’s been proven that hearing something crunch as we bite into it makes it taste better, which leads to quicker satisfaction.

Just spread low-fat peanut butter on a celery stick. You can’t get any simpler than this, and while the peanut butter is high in calories, both it and the celery are packed with essential nutrients.

If you make your popcorn from kernels, thus avoiding whatever else may be in the microwaveable bag, and don’t go overboard on the oil, this is a great snack to satisfy your craving without jacking up your calorie intake. It looks big, feels good in your mouth, and your subconscious won’t realize that that humongous bowl contains mainly air.

Tortilla to the Rescue 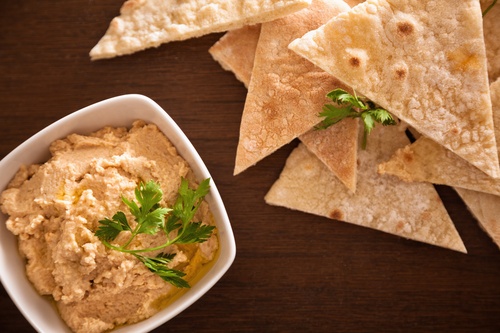 If you often still feel hungry an hour or two after dinner, you might feel the need for something substantial without pigging out on fatty food. Keeping a packet of wholewheat tortilla wrappers in the freezer takes up less space, and is much healthier than other options such as miniature pizzas or starch pockets filled with some meat-like goo. Remember: manufacturers of microwaveable snacks are concerned with their profit margin, not what goes into your body. Making your own fillings takes a little time and puts control back into your hands.

Black Bean Filling: Drain a can of black beans and heat it up in a saucepan with ¼ teaspoon salt, black pepper, ½ teaspoon ground cumin and ½ teaspoon fennel seeds. You can also chop and fry a small onion and a clove or two of garlic if you have the time. Hardly any effort at all adds healthy fiber and protein to your diet and makes enough for both you and your significant other.

Tuna Filling: Combine a drained can of tuna in brine, a small can of sweetcorn, some fresh or dried herbs and two tablespoons of sour cream or Greek yogurt if you have some in the fridge. This will satisfy your craving, and like most other fillings, the excess can be kept in the fridge for the next day.

You may wish to shed a few pounds or just have a healthier lifestyle in general, but simply cutting snacking in front of the TV out of your routine might not be the best way to do that. Knowing what is in your food, and how simple it is to avoid simple starches and sugars right before bedtime while still going to bed satisfied, puts you one easy step closer to your goal.

8 Foods That Boost Your Mood – Infographic