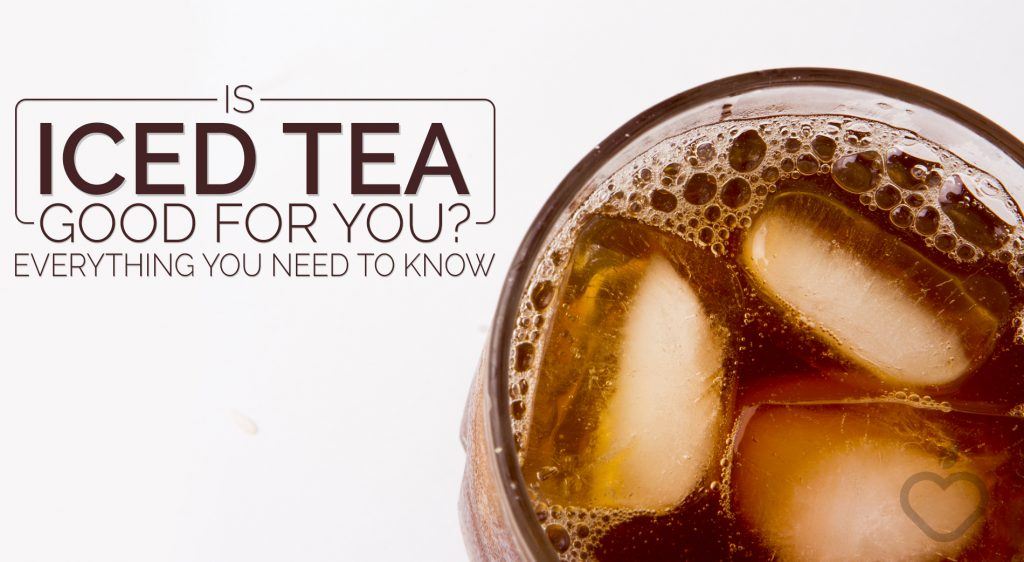 You’ve heard that soda is bad for you, even the diet kind. That’s led to you looking for something to replace it with. What about iced tea? At least it has some flavouring, unlike water, right?

Now you’re wondering whether this is good for your health. There’s just so much conflicting information out there, and it can be so different to get right to the bottom of the answer.

The truth is that there are some benefits to drinking iced tea. At the same time, there are some downsides that you need to be aware of. It really depends on the type of iced tea you have and the ingredients that you add in with it.

That’s why you need to do your comprehensive research. But I don’t want you to spend hours at the computer trying to work through the misinformation and conflicting reports because I’ve done all that for you. Here’s everything you need to know about iced tea and what it can do for you.

Are You Buying It or Making It? 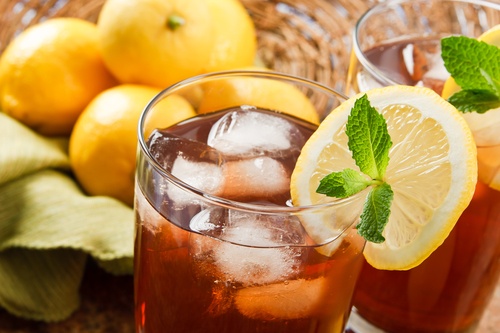 The first thing to consider is whether you’re buying or making the iced tea. This really will affect the health benefits that you can gain from this drink. Sure, enough, some iced tea is very bad for you but these are usually the manufactured ones where you don’t know what’s in them.

Most of the brands that make the drink include so much sugar that the drink becomes just as bad as—sometimes worse than—sodas. They have 250 calories at the very least, so if you’re looking for a trim waistline, this is not the drink for you.

But what if you make your own? Surely you can get rid of all the badness and focus on the good stuff. After all, tea in itself doesn’t exactly have any calories, right? Well, there are negligible calories, right?

And then there are also fruiter versions that you can make from home. Instead of sugar, why not add lemon juice to your iced tea? You get some sweetness, without all the extra calories. Limes also work very well, and you can opt for some natural sweeteners like Stevia instead.

You see, on its own, iced tea is good for you. There are so many benefits once you cut out the sugar (and therefore the high-calorie count), and here’s a look at them.

Why You Need Iced Tea Instead of Soda

The Lack of Sugar When You Don’t Add It 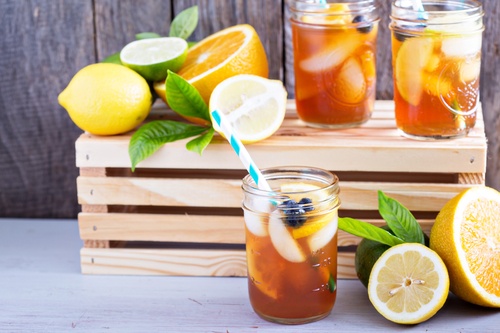 Remember that whole thing about sugar being added to the store-bought options? Well, this isn’t just bad for the waistline. Not adding sugar into your homemade ones will also offer other health benefits.

There ends up being far too much insulin in the body, or the insulin is just so ineffective that there is too much sugar. You are at the risk of developing diabetes because of your health choices.

And then let’s remember that the more sugar you have, the more you become addictive to it. Yes, sugar is addictive. Studies have shown that it is just as bad as—if not worse than—hard drugs for addiction. You end up suffering from a sugar crash and feel the need to have more. You’ll create a difficult cycle to get yourself out of.

So, the biggest benefit you have with iced tea, especially drinking your own, is the lack of sugar that your body will need to deal with. 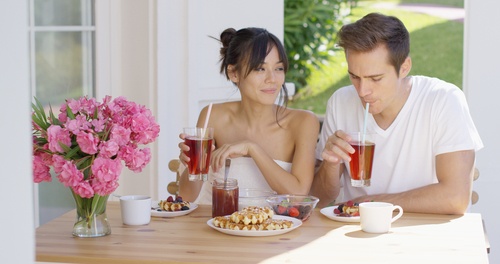 The body has to deal with free radicals on a daily basis. Free radicals cause extensive damage to the body, and they’re not completely understood yet. They have been linked to affecting cells as they repair and grow, meaning that the cells come back damaged or abnormal.

This is where the likes of cancer and dementia are able to get in. They are multiple within these damaged cells, and it’s all the free radicals fault.

So, how does iced tea help with this? It’s all to do with the antioxidants. They are great for suppressing and fighting against the free radicals in the system, so the cells can grow back and form perfectly.

There is still research into how antioxidants fight off the free radicals exactly. Right now, studies have shown the likes of breast, ovarian, colon, and stomach cancer can all be prevented, along with many others.

And let’s not also forget the other benefit of antioxidants: they help to keep the immune system working. You’ll get even more antioxidants when you opt for lemon or lime with your tea, rather than sugars. It’s also possible to gain the benefits by drinking iced tea with mint.

Your immune system is able to fight off more infections and infestations than ever before. You’ll feel like you have more energy and can do more, which puts you in a more positive mindset.

The Lack of Sodium 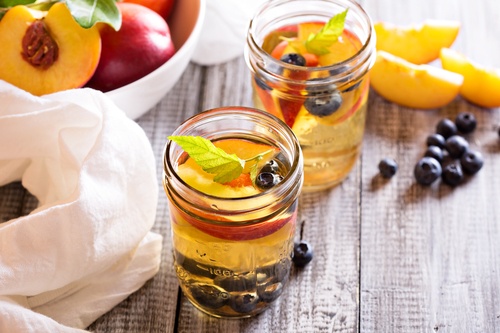 Many drinks contain a lot of sodium, even if you wouldn’t usually think it. This is especially the case with sodas, including diet. Sodium in large amounts is bad for the whole body. It dehydrates the system, and you’re left needing more to drink. Of course, you reach for the drinks that have even more sodium, so you end up creating this damaging cycle.

High levels of sodium over a time period can lead to cardiovascular issues. However, you do need a small amount in the day to help prevent the build-up of lactic acid.

When you get too much sodium, the brain reacts in the same way that it would when you get too much sugar or hard drugs. You start to crave more, and you end up over-consuming considerably. However, the brain also goes into cognitive decline, which means you’re at a much higher risk of developing dementia or Alzheimer’s disease.

The kidneys also suffer when you take in far too much salt. The sodium causes the liquid levels in the body to change, which usually tell the kidneys when to retain or release water—when you need to urinate or don’t need to go. If you take in too much salt, you upset this balance, and your kidneys are affected negatively. You can end up retaining more water than you need and there is the risk of developing kidney stones, which are extremely painful to pass.

Your body doesn’t absorb as much calcium as it needs to, either. This means you’re at a higher risk of developing osteoporosis. And then don’t forget how your skin will look due to the lack of hydration.

So, it’s worth looking at drinks that have less sodium in them. This is where iced tea is great, especially when you make your own. There is none at all.

Lower the Risk of Losing Your Teeth 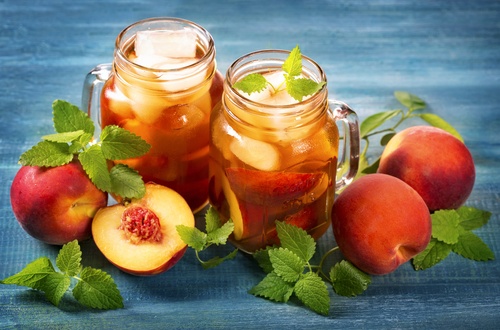 There are studies that show tea can help with keeping all your teeth and reduce cavities forming. However, you will need to make sure you cut out as much sugar as possible to get all the benefits. If you add citrus fruits, you could benefit further.

More studies are needed into this benefit. Right now, scientists are in the early stages of finding out how tea can help with the teeth.

There is a downside to being aware of, especially if you’re going to drink black tea. The tea can stain the teeth, making them yellow or brown in colour. You can improve this with the help of whitening toothpaste and visit your dentist regularly, but you should be aware of the potential discolouration. The colouring doesn’t affect the health of the teeth.

But Isn’t the Caffeine Bad for You? 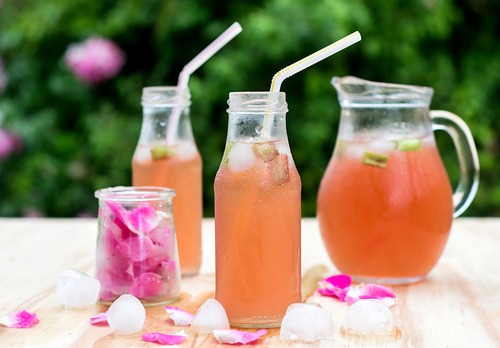 You know all about the levels of caffeine in the iced tea. Isn’t this going to be bad for you? Won’t it keep you awake at night?

Well, there are ways around this but first, let’s look at the actual levels of caffeine. Tea is nowhere near as bad as coffee for the levels of caffeine, especially if you drink filtered coffee instead of instant. Black tea usually has 25-100mg of the caffeine in each tea bag.

Okay, so if you put four to six tea bags into your jug to make your iced tea, you will have a lot. It’s all about controlling the amount that you drink and the amount of bags you use in your jug.

It’s also worth noting that caffeine in small amounts is actually good for the body. It can help with the metabolism, making sure you burn the calories you should throughout the day. In small amounts, caffeine can actually help with the brain function and weight loss. So, having a glass or two of iced tea (even made from black tea) isn’t going to be overly bad for you.

Why Could the Warmth Be Better for You?

Iced tea is great in those warm summers where you need relief from the heat. However, it is possible that a warm cup of tea could be better for you.

First of all, warm liquids are easier for the body to absorb. It will get all the nutrients from the food and drink you consume throughout the day.

At the same time, the warm liquids are soothing. You can de-stress after a hard day with a warm cup of liquid—and it doesn’t need to be tea. However, tea has shown more benefits in a study for lowering the level of cortisol in the system.

Is Iced Tea Good or Bad for You?

Like with anything, getting iced tea in moderation is not going to be bad for you, especially if you make your own. Iced tea made at home doesn’t have the same sugar levels as the store-bought options, which means you’re not putting your health and waistline at risk.

There are plenty of nutrients that come from tea, including antioxidants and caffeine. You also don’t have the sodium levels that you would get from soda. Your whole health is protected, as you see a reduction in stress levels, better kidney function, and healthier brain and heart.

Now is the time to make a few changes to the things you drink. Switch the soda for the iced tea today.