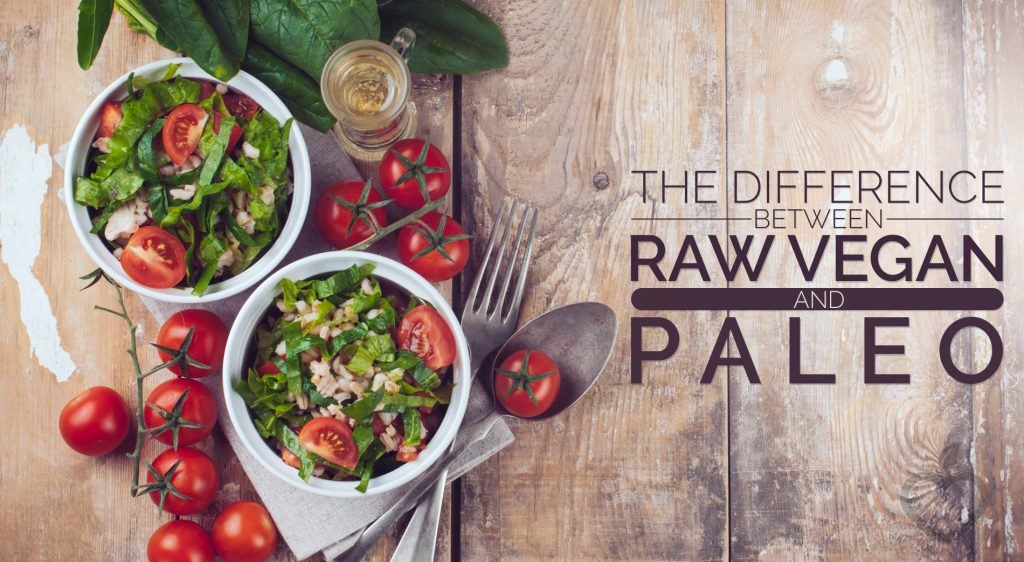 If you’re interested in eating in a healthier way, you should know the difference between raw vegan and paleo eating systems. Today, we’re going to define each type of eating system. Our goal is to empower you by offering you access to information which helps you to select an eating style which is right for your goals. The best way to compare these eating systems is to understand them in the first place! Without further ado, let’s explain what each of these two ways of eating is. Then, we’ll share more information which contrasts these systems and talk about the eating system which we think is the best.

What is a Vegan Diet? 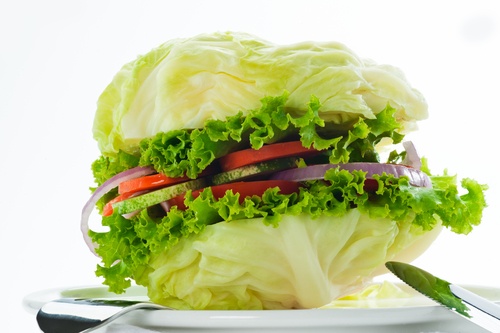 This type of diet consists only of food ingredients, foods, and drinks which are derived from plants. Vegans make a point of avoiding any animal-based food and drink, as well as foods or food ingredients which are made from the by-products of animals. When you go vegan, you won’t be eating eggs, honey or milk and you’ll never touch animal flesh, and this includes fish and other sea creatures.

While a vegan diet will require some organization and a strong emphasis on getting all the vitamins, minerals, calories and essential fatty acids that you need, it’s not a diet which is too tough to follow. The truth is that there are tons of vegans out there, so the world is full of vegan options for food and drink. As well, the Internet is loaded with information about how to be vegan, what vegan is and vegan recipes.

Most vegans prize organic food. They understand that it is the purest since chemical pesticides aren’t used to produce it. However, it’s possible to be vegan and not eat organic. Some people can’t afford organic food sometimes or all the time, and they can be vegan whether they eat organic or not. Naturally, if you can afford it, it’s probably the best way to get the nutrients that you need, as it has a higher purity level.

Within the category of a vegan diet, there is the raw vegan option. This means eating vegan foods which aren’t cooked. Cooking tends to rob foods of nutrients, and therefore people prefer to eat their foods in a more natural state. It’s all about getting maximum nutrients from food.

If you’re already vegan and you’re afraid that you’re not getting all the nutrients that you need via your current meal plan, then the raw vegan option may be right for you.

So, what do vegans like to eat? Well, lots of them enjoy hummus as a snack. It’s made from chickpeas, so it offers protein, without the animal products or animal by-products. As well, many rely on dairy substitutes, such as almond milk, to add creaminess to herbal tea or in order to make cereal. Basically, raw vegans don’t cook food, but they may use uncooked dairy substitutes, as well as whip up recipes in blenders or food processors. They find ways to enjoy raw food. In some cases, preparing raw vegan meals, such as beautiful salads with homemade dressings, may be fun, fast and very fulfilling.

Raw vegans have treats just like everyone else. For example, a vegan might enjoy fruit kebabs with a fresh and fruity dip, or make no-bake bars or squares which contain vegan chocolate or vegan nut butter, or both. Raw vegan recipes are surprisingly delicious, and they are easy to find. In fact, you’ll find some great ones right at our website! Try them whether you’re a raw vegan or not, as they just taste good and they’ll get you out of your cooking comfort zone. It’s always fun to try new and healthy recipes.

Since the marketplace always offers fresh produce and plenty of uncooked substitutes for animal and dairy products, vegans have plenty of food and drink choices at their disposal.

What Is the Paleo Diet? 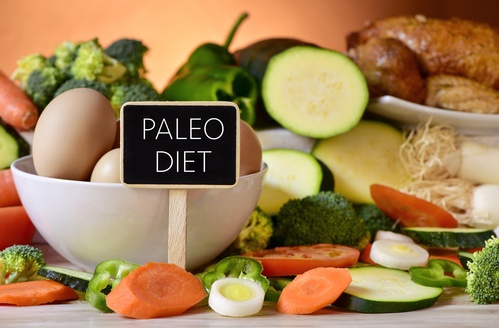 The Paleo diet may also be referred to as the “caveman” diet, and it consists of foods which were consumed by…cavemen. This diet of our earliest ancestors probably featured a lot of veggies, as well as fruit, fish, and meat. It didn’t feature dairy products, processed foods or grain products. If you’re not interested in giving up animal products and you want a healthy eating system, the Paleo diet is a fine choice, if you choose lean proteins.

For example, when it comes to red meat, you are better off with a lean cut, such as an eye around roast, rather than the fattiest types of steak, such as Rib-eye steaks! Also, it’s best to choose organic vegetables, fruit, meat, and fish, as well as organic grains. However, a lot of people do this diet without consuming organic foods.

A typical Paleo diet devotee will eat plenty of meat, including pork, lamb, chicken, beef and turkey. As well, he or she will enjoy a host of fish foods, such as shellfish, haddock, shrimp, salmon and trout. Eggs are also on the menu and so easy to prepare. Most people who follow this eating system prefer eggs which are free-range or the types of eggs which are enriched with fatty acids. Regarding veggies, the most popular choices are probably Kale (which is so trendy these days), onions, tomatoes, broccoli, peppers and carrots. Fruit runs the gamut.

This is a health diet. As with any diet, portions should be controlled. You can’t eat several platefuls of food, no matter what it is, and not expect to gain a bit of weight, unless the plates are filled with salads with no dressing. So, pay attention to portion control if you want to try this diet plan or any other. Counting calories is always wise, even if your focus isn’t on weight loss. As well, choosing the best cuts of meat or fish, with a mind to accessing lean protein, will also be a smart way to go.

There are books about the Paleo diet online, as well as websites which operate on a membership business model. If you want access to a lot of content about this kind of diet, it may be worth paying for a book or membership. However, the fundamentals of this diet are simple. If your earliest ancestors didn’t eat it or have access to it, you should eat it, either, even if you do have access to it. You will eat as much like your early ancestors did as possible.

If you try this diet, track your results. It’s best to track your results with any diet, and this isn’t just about weighing you while you are on it. It’s also about tracking how you feel. Do you have more energy or less? Do you feel deprived or satisfied? You deserve to feel good, so keep a record and take digital photos of yourself occasionally. The right eating system tends to make people look fabulous. The wrong one tends to make them look older and more tired. One of the keys to finding the right diet is how you feel while you’re following it. How you feel tends to show on the outside.

People Disagree About Which Diet is Best 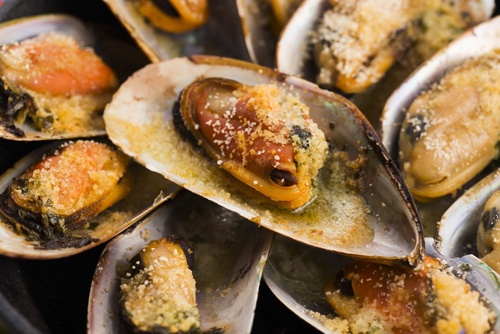 People tend to get passionate about the diets that they are following. For example, +individuals who live the raw vegan way usually think it’s the best diet around and superior to the Paleo diet. Regarding how raw vegan may be truly superior, it’s probably about avoiding animal products and capturing more nutrients from food. Most people don’t follow a raw Paleo diet. They cook some or all the stuff that they eat, except perhaps the fruit and some greens and veggies, so they do lose nutrients there. However, they still get some nutrients.

The raw vegan diet allows people to get a lot of nutrients from food and to avoid animal products and animal-based products which may be produced via hormones. Hormones in the modern meat supply are one big reason why raw vegan diets are considered superior by raw vegans themselves, versus Paleo diets.

In contrast, people who love the Paleo diet believe that it’s better for them than the raw vegan diet. These Pale diet fans generally believe that human beings are omnivores and that they need a combination of animal-based foods and plant-derived foods to be healthy. For this reason, they feel that eating meat and fish is natural and healthier than going without. Those who eat organic proteins don’t need to worry about hormones so they can avoid that issue if they want to. Overall, those who follow the Paleo diet believe that it’s what human beings are supposed to eat. They think that the raw vegan diet is just too restrictive.

What is Our Opinion? 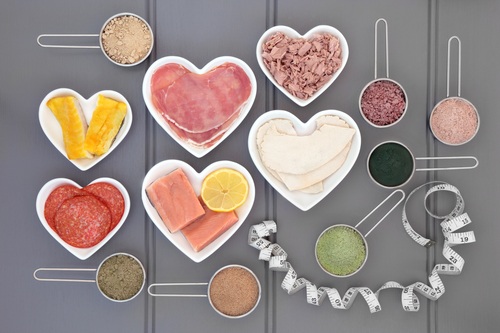 We think there is no right diet for everyone. We are all different. For example, those who are immuno-suppressed tend to do better with high-protein diets and may flourish on the Paleo diet, whereas the raw vegan diet might make it harder for them to get the protein that they need. Conversely, someone who is struggling to avoid heart problems which run in the family may prefer the raw vegan diet, as it doesn’t expose them to artery-clogging fats from animal protein. The fat in animal products, such as steaks, is known to clog the arteries and set the stage for heart attacks and other cardiovascular health problems.

So, there isn’t one right diet. Sometimes, a person’s ethics play a role. Someone who feels strongly about animal cruelty and doesn’t want to contribute to the pain, suffering and death of animals will find that a raw vegan diet is suitable, rather than a Paleo diet. Paleo diets do feature meat and fish, and there is no way around that.

So, there are different reasons to embrace one diet or the other. If you’re basically healthy and don’t have strong views about eating animals or not, you may benefit from trying both diets and then seeing which one is best for you.

Our goals vary when it comes to choosing new diet plans. For example, some people change the way that they eat to lose weight. A raw vegan diet may spark weight loss. However, it doesn’t always, as some foods which are raw do have plenty of calories.

The Paleo diet is known to promote quick and dependable weight loss. It’s free of grains and most carbs, and this means that it shocks the body into burning off the pounds. We eat a lot of carbs as a rule, and they make weight loss tough as eating bad carbs tends to wreak havoc on our blood sugar levels. Blood sugar levels play a prominent role in what we weight.

On balance, Paleo may be the better diet for weight loss, especially if you’ve been in the habit of eating grains and dairy before you start it. Your system will adjust to getting a cleaner diet of “caveman” foods, and you’re likely to look leaner pretty fast. To get the same weight loss benefits from a raw vegan diet, you’ll need to count calories and make healthy choices. There are a lot of vegan foods with very high-calorie counts, such as sesame tahini and coconut milk. Both are wholesome, but neither are “diet” foods.

As you can see, we are all different and deciding which diet is better is about knowing what you want from a diet and choosing the eating system which is most appropriate for you. Of course, you can always try both. However, we recommend trying each one for at least a month. These diets need time to work, so be patient as the benefits of each diet become apparent. If you don’t get the results that you want after a month, try the other one. It may work for you.