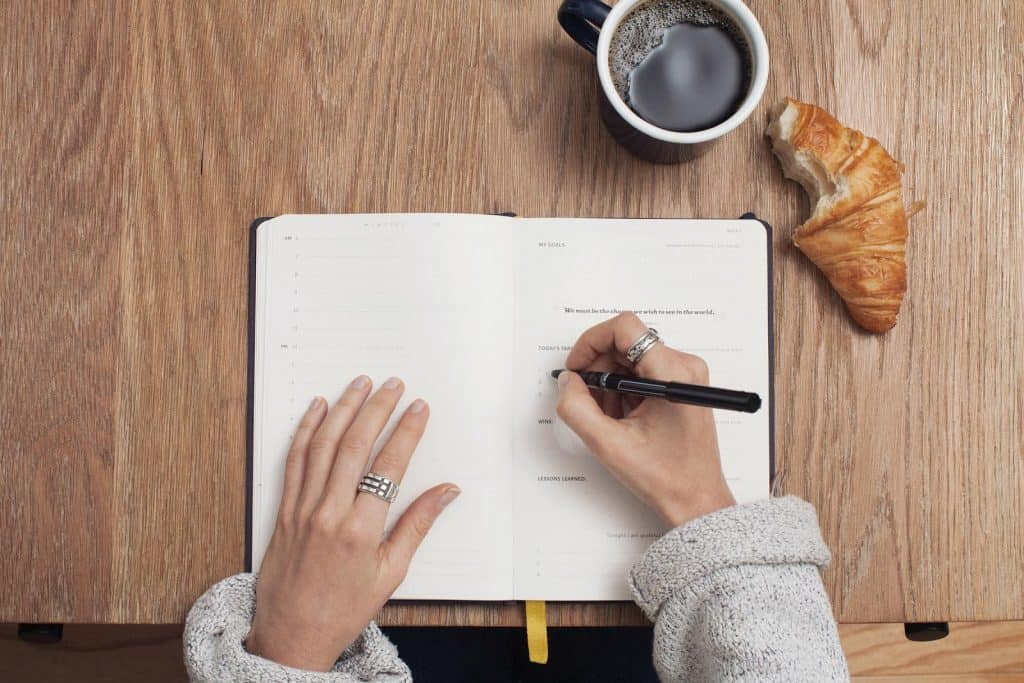 Have we thrown the baby out with the bathwater when it comes to keeping a journal related to food?

Many people who have tried to lose weight in the past have been told by dieticians, popular articles, and other sources to keep a food diary. For most of these sources, their instructions were simple. Write down what you ate, what amount, and how many calories your meal was worth. Many times these food diaries were directly tied to various diets and weight loss programs.

However, dieting and purposeful attempts at achieving weight loss have come under tremendous scrutiny in recent years. Researchers have shown that 95% of people regain any weight they lost on a diet and that dieting directly leads to binge eating. As a result, new movements like Intuitive Eating and Health At Every Size write explicitly about anti-diet principles such as ‘Reject The Diet Mentality’.

Even Weight Watchers has now rebranded to WW and in their recent marketing campaign with James Corden said, “it’s not really about weight loss but about wellness and health and feeling better”.

As public opinion radically shifts away from dieting and weight loss, people are trying new tools like ‘Unconditional Eating’ and ditching their old practices like keeping a food diary.

Please note when I use the term ‘new’ I am talking about this in terms of public opinion. There’s actually decades of research into this ‘new’ way of keeping a journal, but previously the public was more interested in the old fashioned way of keeping a calorie-counting food diary. 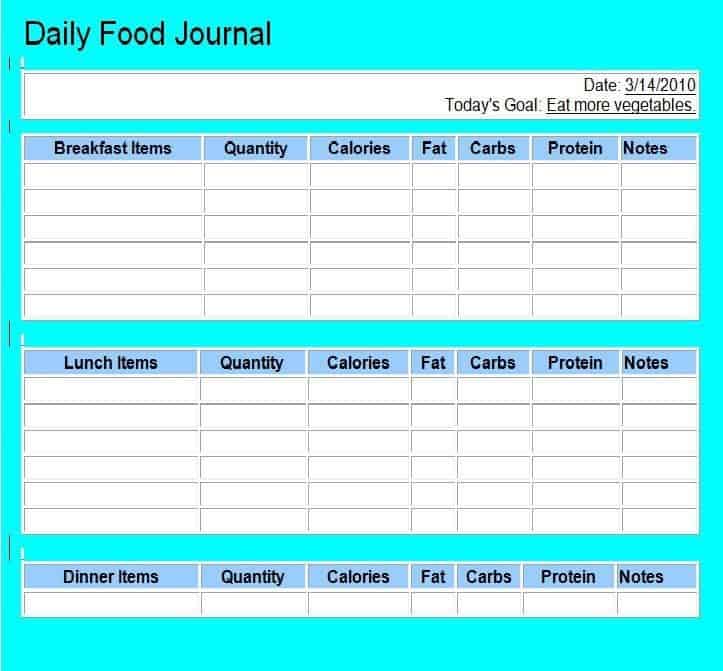 In the past, food journals were associated with amounts of food, in particular by recording overall caloric amounts. The thinking was that people often eat more than they consciously realize, so if they recorded the amounts of food they ate then they would eat less and lose weight.

However, this way of journaling promoted a black and white way of thinking about food. If you were under your day’s caloric limits you were ‘good’, but  if you surpassed your caloric limit allotted to you then you were implicitly ‘bad’.

Plus, this old way of food journaling was very boring and routine, which led to people becoming disengaged from and bored with their food journal and ultimately dropping off from recording entries.

The final nail in the coffin was the scientific community’s consensus that restrictive attempts at weight loss often backfired. A person was better off not restrictive dieting at all!  As food diaries were oftentimes an integral part of restrictive diets, these habits began to fall away.

So over time many people became more skeptical than ever about keeping a food diary because of these old associations linked to restrictive dieting and failed weight loss.

However, as I hinted above, there is actually solid evidence that keeping a journal, in the manner outlined by research into Cognitive Behavioral Therapy (CBT), helps prevent binge eating and helps people to manage their overall diet.

For example, here is a meta-analysis study showing that keeping a food journal using the CBT methodology shows a 42% abstinence of binging in clients who stuck with the practice for approximately 3 months.

Again, please note that by ‘new’ I am referring to what I believe is increased acceptance to journaling in the method recommended by CBT.  While this method of journaling has been around for some time, previously the emphasis on keeping a food diary was on recording calories, which is not something that this CBT food journal methodology recommends.

How To Keep A CBT Food Journal

The old way of keeping a food journal entailed writing down calories, but the CBT way of food journaling is more about noticing your psychology, in particular your thoughts, emotions, behaviors, bodily sensations. Down below I’ll review the information needed for using a CBT journal, but first here is a picture of a Cognitive Behavioral Therapy blank journal template (modified slightly by me to reflect recent research on CBT): 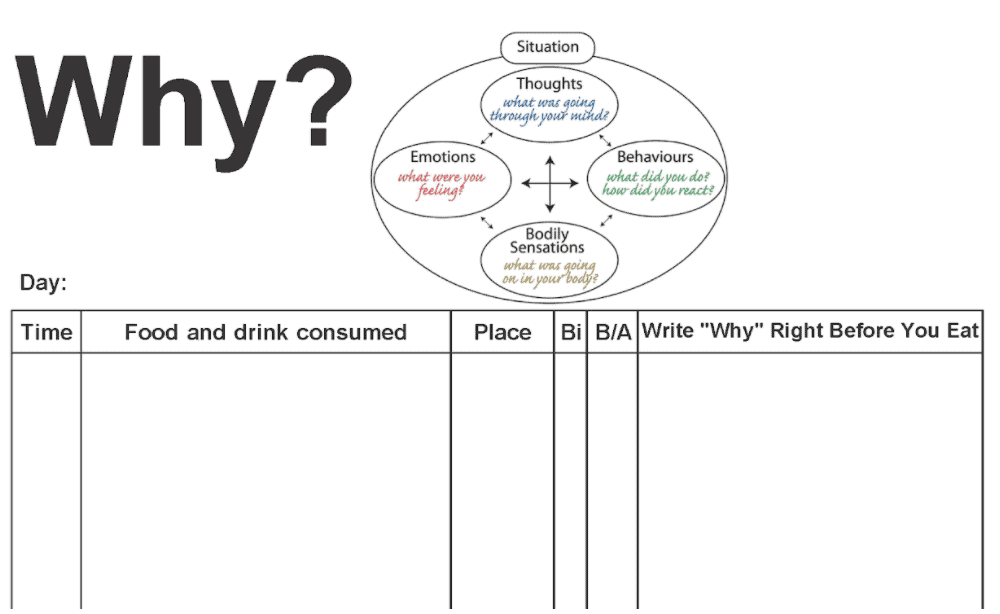 The first part of the CBT journal is very similar to the old fashioned food diaries. You simply record the day and time you’re eating.

CBT is different from old fashioned food journals in part because CBT emphasizes noticing the location you are when you eat. Noticing your location is important because by keeping a record of when you eat, you will start to see if there are common locations that precede a binge.

For example, many times people binge in their kitchen. By recording the location where you binge, you can start to become aware of these triggering locations, as well as times. If you can predict when you binge with confidence, then you can significantly increase your chances of avoiding a binge simply with this knowledge.

For example, in the past, you may have been asked to record the precise amount of food using a scale and then translating that amount of food into a caloric estimate. Weighing your food and adding up numbers was either incredibly boring or obsessive for many people and did not become a long-term habit. Moreover, there was certainly nothing related to psychological understanding in this way of keeping a food diary!

In the CBT food journal, all your record about food is what you eat, and the overall emphasis is on being a generalist. For example, for breakfast, you could just write ‘cereal and milk’ whereas previously you would have to write ‘½ cup of cereal worth 60 calories and ¾ cup milk worth 80 calories for a total of 140 calories’.

These terms are shorthand and simply mean ‘Binge’ and ‘Before / After’.

The ‘Bi’ column is used to indicate if you binge. A binge does not need to be tons of food, but it is up to the individual in question to decide whether or not they binged. Sometimes a person may eat a normal amount of food but because they lost control and feel terribly guilty they perceive their eating as a binge.

The ‘B/A’ column is used to note if you journal before or after you eat.  Journaling before you eat is a key principle to the incredible success rates behind using CBT for binge eating reductions.  However, it’s not expected that you will be 100% perfect and only record before you eat.

Journaling before you eat has several key benefits. For starters, the best thing about this is that it’s a simple guiding principle — ‘journal before you eat’. Oftentimes people who struggle with binge eating are on automatic pilot, but this rule is simple enough to remember and helps provide proper motivation so that a person can start breaking their automatic eating habits. Furthermore, journaling before you eat gets you thinking about the food you are going to eat.

Write “Why” Before You Eat

The final column, ‘Write Why Before You Eat’, is the hallmark practice of CBT food journaling.

Please note that in the picture above, I use a slightly modified version according to newer research into CBT which includes bodily sensations and situations.

All you do in this step is to write down briefly what you are thinking, your emotions, or what you are feeling in your body. You can also include situations like ‘I feel like eating because my boss yelled at me and I’m really stressed’.

But Won’t Journaling Like This Make Me Obsessed With Food?

One common concern that comes up for people who are new to this way of journaling is their heightened awareness of food. Being asked to consider one’s thoughts, emotions and bodily sensations around food can be challenging and uncomfortable.

However, this heightened awareness will become more second nature and more natural in just a few weeks. Plus, the CBT approach emphasizes that in the beginning that you can be easy going with this journal. You do not have to record much about your feelings, thoughts, and bodily sensations every time you eat, instead, you can just write a simple word like ‘anxious’ or ‘calm’.

Finally, one last word of wisdom. This practice of journaling can be difficult in the beginning.  It may not be easy at first to write out your psychological state before eating, even if you only write a few words, in part because it’s different from what you normally do.

But, you will definitely not have to keep up this way of journaling forever. According to scientific studies, this journaling period showed lasting benefits after 2-3 months. As you gain more awareness of your mental states around food and how binge eating progresses from slight food cravings to tidal waves, you’ll naturally shift your eating behaviors. As your eating behaviors shift you’ll end up making sustainable changes and won’t need the journal anymore.

In conclusion, if you are struggling with binge eating then trying something simple that yields measurable benefits is a great idea!  Don’t let your old perceptions of a calorie food diary get in the way of keeping a CBT food awareness journal!

Bio: Jared Levenson is a binge eating coach.  He first teaches private clients about CBT food journaling techniques to stop binge eating, before leading them further onto Intuitive Eating.  His vision is to help people to ultimately reach Eating Enlightenment, normality with food, and freedom from food fears and thoughts. For more info visit Eating Enlightenment.