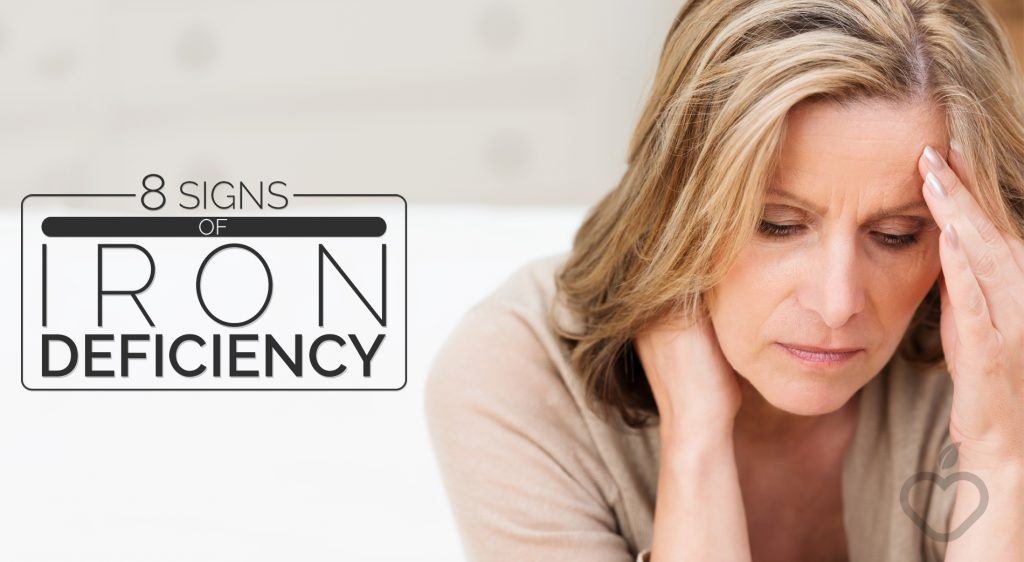 An iron deficiency is common, especially in women. It’s so common that it is one of the most commonly checked for deficiencies, so if it is a problem you will usually get treatment quickly.

Not getting enough iron can lead to anaemia. The great news is that this is treatable. However, if it’s not treated, it can lead to other health problems. Most of the health problems are side effects of the condition, rather than symptoms. To be able to get rid of the side effects, you need to treat the overall condition and then work on repairing the damage.

The best thing is just to stop an iron deficiency getting worse in the first place. This means getting treatment as soon as possible, whether it involves medication or a change in your diet.

You see, anaemia means that your body isn’t getting the right amount of red blood cells circulating through the system. Your body isn’t getting enough haemoglobin, a type of protein necessary for carrying oxygen around the body. The tissues and muscles can’t function properly, which can cause many issues for the health in the long term.

While iron deficiency is common, too many of us don’t realise that we have an issue. We attribute the symptoms to other issues, like lack of sleep, parenthood, and so much more. It can also be temporary due to heavy periods or because of pregnancy or postpartum bleeding.

By looking out for the common signs of iron deficiency, you can help to protect your health. You’ll get treatment much sooner because your doctor will be able to carry out the right tests.

Here are the most common eight signs of iron deficiency to look out for. 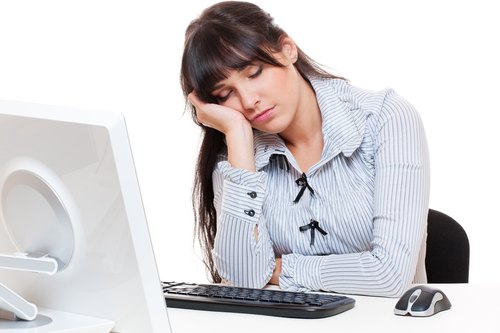 When you have an iron deficiency, you likely feel tired. This isn’t just a lack of sleep one night tired. You’ll feel exhausted both mentally and physically. You’ll feel like your whole body wants you to stop and take a break.

The problem is that many of us can suffer from exhaustion for other reasons. Mothers regularly run on fumes because of sleep deprivation. We try to do so much in our lives that we’re used to feeling tired and fed up.

So while being exhausted is a sign of a problem, we tend to overlook that feeling. We just brush it off as lack of sleep or our overall life getting the better of us. We think that we need a day off just to recover and we’ll be fine. Sure, this one day may help, but it is only temporary. Before we know it, we feel mentally and physically fatigued again.

Why does anaemia make us feel like this? Well, a deficiency in iron means that there isn’t as much oxygen passing the blood stream. Our organs, tissues, and brain don’t get the right amount of oxygen, so we don’t have the energy to get everything done. If you are already fatigued because of work, you’ll find it much harder to recover and do anything else.

You Look Pale All the Time 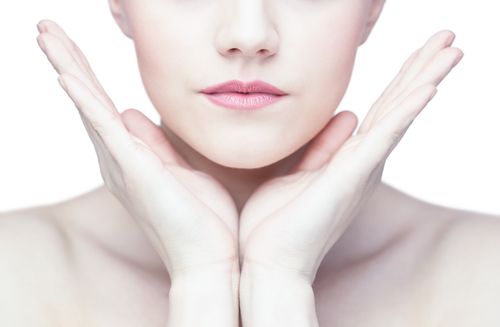 No matter how many hours you spend on the sun bed, your iron deficiency will make you look pale. You may end up with a lot of people constantly asking if you’re ill or under the weather. Others will say that you look like you’re related to Dracula.

The lack of haemoglobin is the issue for this. It’s the haemoglobin protein that gives your blood the red colour that we associate with blood. If you don’t have enough of it in your body, then you’re going to lose some of the deep redness. Your skin isn’t going to look at rosy or pink as it usually would.

This is a symptom much easier to spot in those with an already light complexion. If you do have darker skin, you may not realise that your skin is paler than it should be. The best way to check this is by looking at your gums and the inside of your lips. These sections will always have a pinkish hue, so if they look pale, then you may have an issue with a lack of iron in your body.

The next time someone says you look ill, it may be worth checking out your colouring. Put it together with other signs and decide whether you need to take a trip to the doctor to get your iron levels checked out.

You Struggle to Get Enough Air In

Whether you’re walking normally, getting up and down stairs, or trying to do exercise, what is it like getting air in? When you’re exercising you will usually find it harder, but what about when you’re walking around as a low or moderate intensity level?

You shouldn’t struggle to breathe too much. Talking shouldn’t be too much of an issue. However, if you have a low iron problem, then this is one of the signs. It’s all linked to that oxygen that you’re not getting into your blood stream.

Yes, a lack of oxygen in the blood can lead to problems with the breathing! Your body isn’t getting enough oxygen to get through the day, and it passes the message into the lungs to work harder. You’ll feel like you’re out of breath because it feels like the work is never good enough.

You should start to think about getting levels checked out by thinking about the way you feel with everyday activities. If you used to be fine walking up the stairs and you’re not out of breath, assess why that is the case. When you can’t attribute any other reason to it, then it could be anaemia. 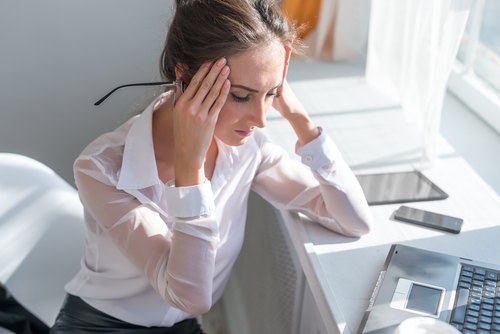 Your Head is Constantly Hurting

How often do you have a headache? If you’ve taken a knock to the head, it’s normal. If you’re dehydrated, then you could find that drinking more will help. But what if that headache is always there? Does it feel like you wake up and go to sleep with a same migraine? That nothing you do makes it any better?

This is a major sign of an iron deficiency. A constant headache means that your brain likely isn’t getting enough oxygen. This makes sense when you put the iron deficiency in there since your body isn’t passing the right amount of oxygen around the body.

Your brain doesn’t need as much as other parts of your body. There are high chances that your body will take the oxygen from the brain, so you’re left feeling the side effects of that: a constant headache. The brain swells, which puts pressure on arteries and nerves. It’s no surprise really that you end up with a major headache.

You Start to Suffer from Pica

Pica is a condition where you crave something to eat that isn’t actually food. While scientists don’t completely understand what causes our cravings, they believe that it is something to do with a lack of nutrients. Pica is possibly a lack of iron and certainly shows up in those who are anaemic.

People can start craving dirt, dish soap, clay, and even cotton wool. We know deep down that the cravings aren’t normal but that doesn’t stop us from craving the taste of some of these non-food items.

On its own, pica isn’t dangerous. It’s only when you start giving into the cravings that you end up causing problems. After all, you know that you should eat cotton wool or dish soap!

Most people who suffer from iron deficiency start craving ice. This isn’t too bad to give into since ice is just frozen water. While you can give into the craving, you should still get it seen to so you can check for any other reasons for this craving.

Pica is a major problem during pregnancy because of the lack of iron. It is very common, so don’t be embarrassed to talk to your doctor about it.

Your Hair is Constantly Falling Out 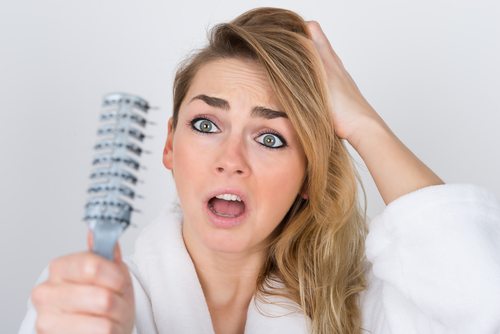 Losing our hair is a normal part of the day. We tend to lose a small amount as the hair cells die. The great news is that this hair will grow back. It’s only going to be a few strands, and you’ll usually find that they fall out when you’re brushing or washing your hair. The only time you’ll lose more is if you’ve had your hair up for a few days and you’re getting two or three days’ worth of loss built up.

Those “few” by the way are around 100 strands a day. No, this isn’t a lot in the grand scheme of things since they will grow back.

When your hair is constantly falling out through the day, you should be concerned. This is a sign that you’re deficient in nutrients, especially in iron.

Your body isn’t getting the iron it needs, remembers? That means you’re at a risk of all your cells dying. They need the oxygen to repair and grow. Like with the headaches, the body takes the oxygen away from the cells because they’re not as important.

Losing hair is a sign of other health problems. You should discuss this condition with your doctor and get yourself a full-body work up.

This is one of those medical conditions that you need to look out for when suffering from anaemia. Not having enough iron in your body will slow the thyroid’s natural function. This means the metabolism is slowed down, and you end up burning fewer calories than average. You can gain weight, feel exhausted, and have a low body temperature. You could also suffer from depression due to the other symptoms.

The scary thing is 60% of people suffering from thyroid problems won’t even know! The symptoms are noted in so many other problems and often pushed off to one side.

If you get your anaemia under control, your hypothyroidism may not disappear. This is because the thyroid has already been affected. You may need medication to help balance this out. Your doctor will help you get your energy levels back and make you feel fitter and healthier.

Your Hands and Feet are Always Cold 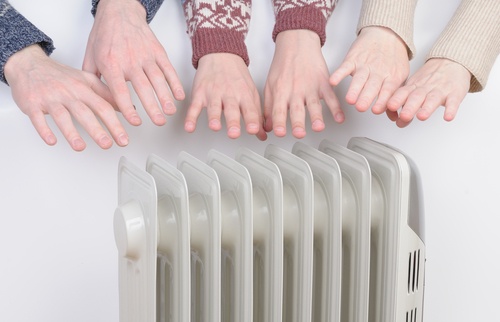 Do you struggle to get your hands and feet warm? It could be a warm day outside, but you still have an icy touch.

When your body isn’t getting enough oxygen, it starts to think about the most important areas for your body. Your organs are the most important areas so your extremities will start to suffer. You’ll feel your fingers and toes are always cold, and they could also be painful. There’s this sense of them seizing up, and you just don’t know the last time they actually felt normal. Even with gloves on, you can feel like your fingers aren’t getting any warmer.

This can also be a sign of other health problems. It’s worth getting your condition checked out by a doctor to make sure your health is protected.

Do You Have Any of the Signs of Iron Deficiency?

Now it’s time to get your overall health checked out. If you have any of the above signs, you need to get them all checked out by a doctor. Make sure you have your blood taken because they are a sign of iron deficiency.

The good news is that you can repair some of the damage naturally. Look into foods that are full of iron and make sure you eat them more often. Dark green leafy vegetables are among the best for iron levels, which means vegans and vegetarians don’t have to miss out! Get more broccoli, kale, spinach, and even collards in your diet. If you are a meat eater, red meat is also a great way of getting more iron into your body.

Don’t avoid the trip to the doctor. Don’t start thinking that your symptoms are nothing to worry about. Get your iron levels checked to avoid other health problems.

The Okinawa Diet: What You Need to Know – Infographic