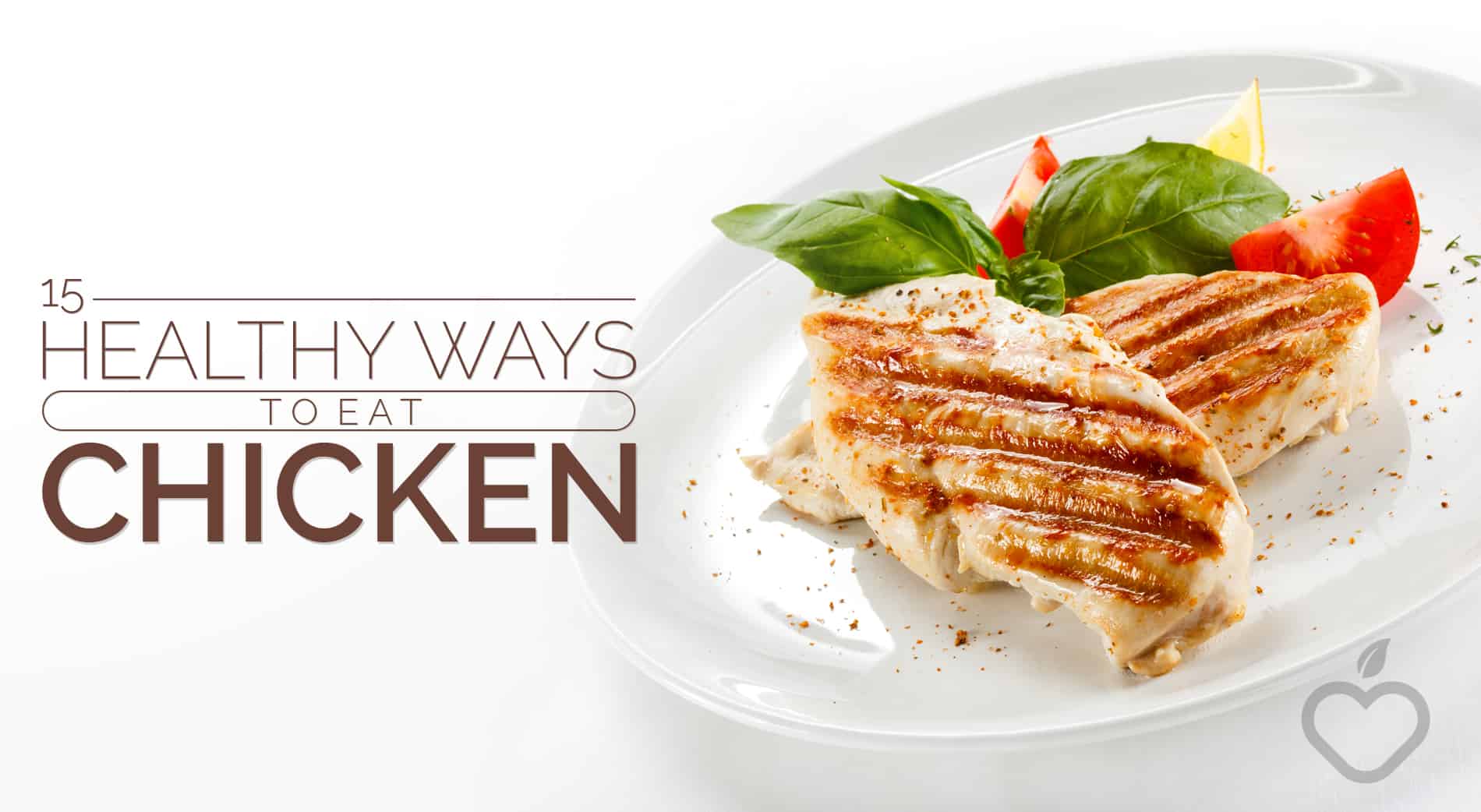 Chicken has always been a favorite on our meal tables, not just because it’s delicious, but also because of the many benefits, it can offer. It’s cheap and available anytime in the grocery store. It’s also a great source of proteins and essential nutrients. It’s very versatile meat because it can be prepared in different ways.

As a source of meat, chicken can be typed for either dark or light. The difference isn’t that important but suffice it say that dark chicken meat contains more saturated fats and cholesterol. What consumers should be more aware is that the fat in the skin where most of the saturated fats and cholesterol can be found. If one worries too much about the unhealthy parts of the chicken, just remove the skin.

Buy the chicken whole as it would be more economical. Cutting it up isn’t that difficult and requires just a little patience and practice. The meat is tender but still, sharpen the knives first.  Chicken is cheap as they’re raised in big numbers and are kept healthy with antibiotics to promote faster growth and prevent illness.  People still have a choice of eating healthier by opting for those raised without antibiotics and are certified as organic. The downside, these will be more expensive. The upside, they are healthier.

Preparing chicken could spell the differences on its health value. Frying it would certainly raise its calorie count because of the extra fat. To get the best health benefits from chicken, one can either bake, roast or stir-fry the meat with some vegetables. Here are some ways that could make your chicken meals healthier: 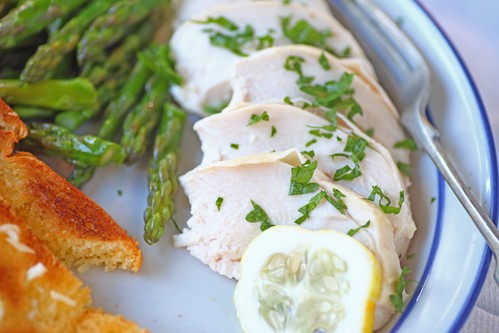 This is one of the healthiest ways to cook chicken. The only ingredients one will need are water and the chicken itself. It’s like poaching eggs. Just boil the water in a deep saucepan, drop the chicken, and let simmer until thoroughly cooked. How much water to use will depend on how much or which part of the chicken is to be cooked.

As expected, one will end up with a cooked chicken that is devoid or lacking in taste. And as expected, there’s always a solution, and this entails adding some flavors without abating the chicken’s health value. For instance, one can make chicken soup using chicken and water plus some herbs, vegetables, and spices.

Poached in Other Liquids

Initial preparations are like poaching chicken in water, except this method will use other liquids instead of water. An advantage to this is that the chicken can be served as is when cooked or can be cut-up to be used in salads, casseroles, sandwiches and pasta dishes.

When poaching, choose boneless chicken or bone-in chicken breast with the skin removed to maintain the low-calorie count. To poach, put the chicken in a saucepan and cover it with water, wine, broth or other combinations. Enhance the flavor of the chicken with garlic, sprigs of herbs, onions, peppercorns, and salt. Reduce heat and simmer until the chicken is thoroughly cooked. 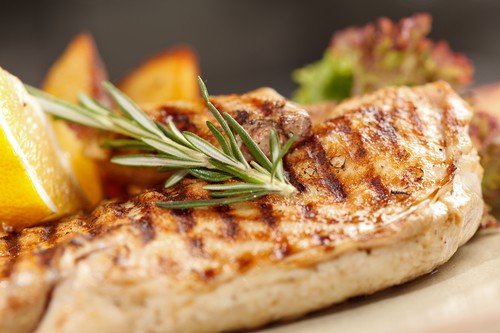 This is also a healthy option for cooking chicken but be wary of the amount of oil applied. Use olive oil for brushing to keep the meat from drying up but do it sparingly. Don’t use too much oil in the brushing process. Nobody wants more calories than they need. Or better still, marinate the chicken before grilling and use fresh herbs, spices, and vinegar for that extra flavor.

Breast meat is the choice when making wraps. This method is easy and convenient, and one can have wraps for any meal of the day. Having chicken wraps for lunch will give anyone that extra boost. For dinner or breakfast, shred those leftover chicken breast, wrap in a whole wheat tortilla with some cheese, vegetables, and a good serving of salsa. That will be an ultra-healthy meal.

Sautéing is almost the same as grilling where one would require some heat and some oil. Use a non-stick pan because this will lessen the amount of fat needed. For that healthy kick, avoid using too much cream and butter on the dish. Having these in mind, one will be ending up with a very healthy chicken meal. For want chicken with a crispy outer layer, sear the meat first on the stove top, then bake in an oven.

Choose the herbs carefully when giving that special flavor to the roast chicken. Combining lemon and basil is perfect. So is lemon and rosemary. Herbs will give the meat great flavor, and a bonus to this method is that it will make the inside of the house smell incredible, almost good enough to eat! 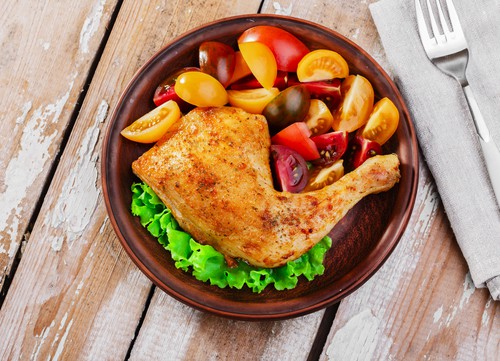 This could be the healthiest way to cook chicken. Not much fat is used, and the baked chicken will be infused with the herbs, spices, and vegetables that are used in its preparation. First, rub the chicken with some olive oil, then season it with spices and herbs. Lay the chicken in a baking pan and surround it with an assortment of vegetables. Also, add more spices like cloves, onions, garlic, and some lemon slices. For a healthier preparation, peel off the skin for each serving before baking.

Searing chicken is one way of sealing in the moisture and flavors in the meat. Searing is pan-frying using minimal oil until the outside of the meat turns golden brown. There will be very flavorful morsels left on the pan after searing and these are always incorporated into a sauce once a liquid is added. One can simmer the seared chicken into the sauce or make a sauce then pour it on the chicken. 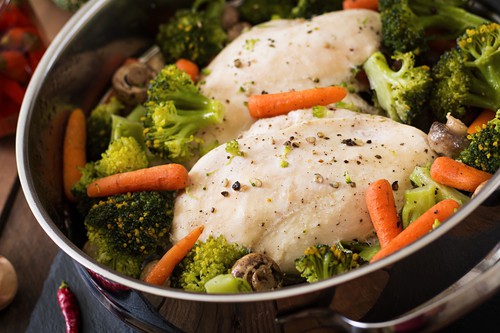 This is similar in some respects to poaching. The main difference is that poached chicken is cooked in boiling water while the steamed chicken is cooked over boiling water. Steaming will require a stockpot (covered) with a steamer inside. One can use any liquid. It can be plain water, juice, wine or broth. For some extra flavor, add in the boiling medium some vegetables, herbs, and spices. One can also marinate the chicken in his favorite mixture and steam it afterward. After the meat is cooked, it’s also possible to thicken the remaining liquid and serve it with the meat or opt to save the liquid for some other use later.

This an easy, exciting, and very healthy way to eat chicken. First, combine chili sauce, oil, lime juice, ginger, garlic, and some sriracha. Mix well, add the chicken breasts, toss, then allow to marinate. Cook the chicken breast then slice thinly. Separate the lettuce leaves into cups and fill each with the chicken. Garnish the dish with some other healthy ingredients. 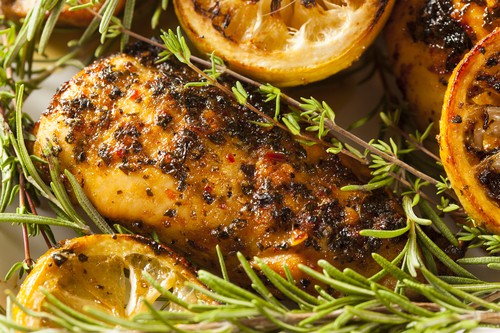 Marinating chicken will keep the meat from drying up when cooking and, of course, it will give the meat lots of flavors. Marinates differ with each country and each as exciting as the other. Here is an Italian inspired marinade: Combine olive oil, white vinegar, dried parsley, lemon juice, and basil. Add oregano, salt, black pepper, some chopped garlic, and garlic powder. Toss and then add the chicken breast to the mixture. Marinate the meat for about ten minutes, but a long time would infuse the flavors better. Then one can either bake or grill in the oven until the juices start to run clear.

This is a weight-watchers delight because it will give them limited calories and at the same time, they can enjoy a tasty and healthy treat. Cook chicken that has been seasoned with oregano, pepper, garlic powder, and salt. Let the cooked chicken stand for a few minutes before slicing thinly. Lay out some romaine lettuce leaves, then top them with the sliced chicken, avocado, tomato slices, and some croutons. Finally, drizzle each with some Caesar dressing and sprinkles of Parmesan cheese. Wrap. Instead of Caesar’s dressing, one can also use other types of dressing. 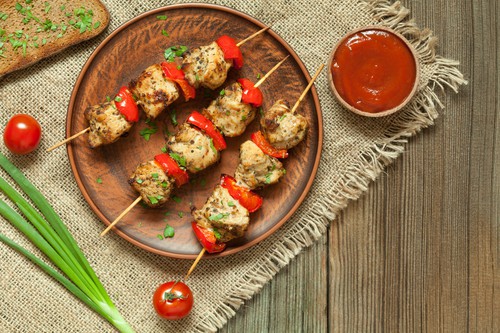 Kebabs are an easy and fun way to cook chicken. It only requires some veggies and cubes of chicken breast. Chop vegetables into the desired sizes. Onions, zucchinis, and peppers are favorites. Alternates these with chicken cubes on skewers. These can either be baked or grilled.

This is another simple and healthy way of having chicken for a meal. Place the following on a baking pan: carrots, tomatoes, bell peppers, red onions, broccoli and lastly, the chicken.  For the marinade combine the following: olive oil, cilantro, salt, pepper, and lime juice. Pour this marinade over the chicken and the vegetables, then add some more salt and pepper. Toss until everything has been coated with the marinade. Bake until everything has been thoroughly cooked. Portion cooked rice on plates and top this with roasted vegetables and chicken slices. 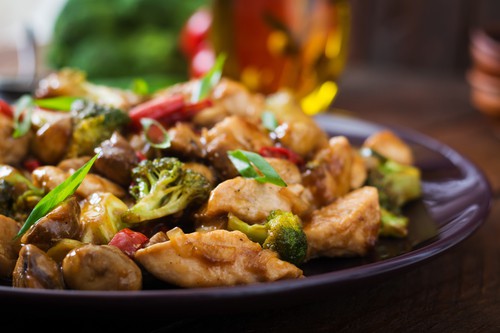 The Benefits of Eating Chicken 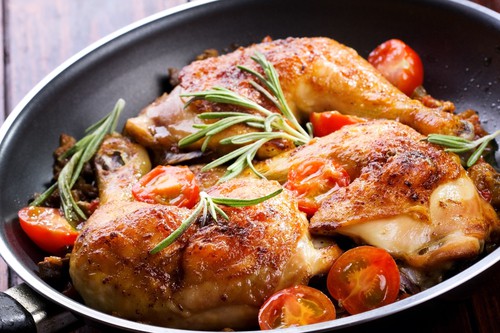 Almost everybody eats chicken because it’s the world’s most popular protein source. The meat is not only delicious but has a lot of benefits. Here are some of the benefits:

Chicken is rich in protein. Chicken an excellent protein source and not to mention, perhaps the cheapest one. We need protein in the diet because it contains amino acids. These are responsible for the building and repair of our body tissues.

Promotes weight loss. A diet that contains high protein levels is good for weight watchers. Chicken being cheap and readily available has become the main meat for those who want to lose weight.

Helps regulate blood pressure. Research has been conducted where people are suffering from hypertension were given chicken in their diet which was complimented with nuts, fruits, low-dietary products, and vegetables. The results showed that chicken meat in diets could influence the lowering of blood pressure.

Reduces the risk of developing cancer. Tests have been conducted on vegetarians where red meats such as pork, lamb, and beef were included in their diets. Results indicated that there was an increased risk of developing colorectal cancer. Another group was tested where fish, vegetables, and chicken composed their regimen and this group; the cancer risk was reduced. Such studies though are not yet conclusive.

Reduced levels of cholesterol. The build-up of cholesterol in the body could only lead to the development of heart diseases. Red meat has higher cholesterol and saturated fat levels than chicken, vegetables, and fish. Consumers of the latter group have lower risks of having heart diseases. Bear in mind though that chicken could be healthier than red meat, but they still must be consumed in moderation.

Treatment of the common cold. Like Grandma’s formula for common colds, sore throats, and a congested nose, a bowl of hot chicken noodle soup can indeed give relief and enjoyment.

Choose your chicken carefully. Don’t just buy chicken without checking them up first. Here are some helpful guidelines when purchasing chicken:

Inspection. Only buy chicken that has been inspected to ensure they didn’t have any diseases and are guaranteed to have the best quality.

Frozen or not? People can buy chicken fresh where the raw poultry hasn’t been frozen yet below 26-degrees F or frozen where it has been held at 0 to -17.8-degrees C). For the latter, the chicken must be labeled as frozen.

Antibiotics and growth hormones. Don’t buy chicken that has been raised with growth hormones. Antibiotics can be used on chickens to prevent them from contracting or spreading diseases. The law, however, requires raisers not to give antibiotics weeks before slaughter time. This will prevent antibiotic residues from remaining inside the chicken’s system.

Bacteria. Between 40 and 140-degrees F, bacteria might start to thrive in the meat. The freezing process will not kill bacteria but will inhibit them from growing in numbers and eventually lead to decomposition. That’s the reason why chicken meat should not be eaten rare or worse, raw. Thorough cooking of chicken meat will kill these bacteria.

The most common types of dangerous bacteria found in this poultry are Salmonella, Campylobacter jejuni, Staphylococcus aureus, E. coli, and Listeria monocytogenes.