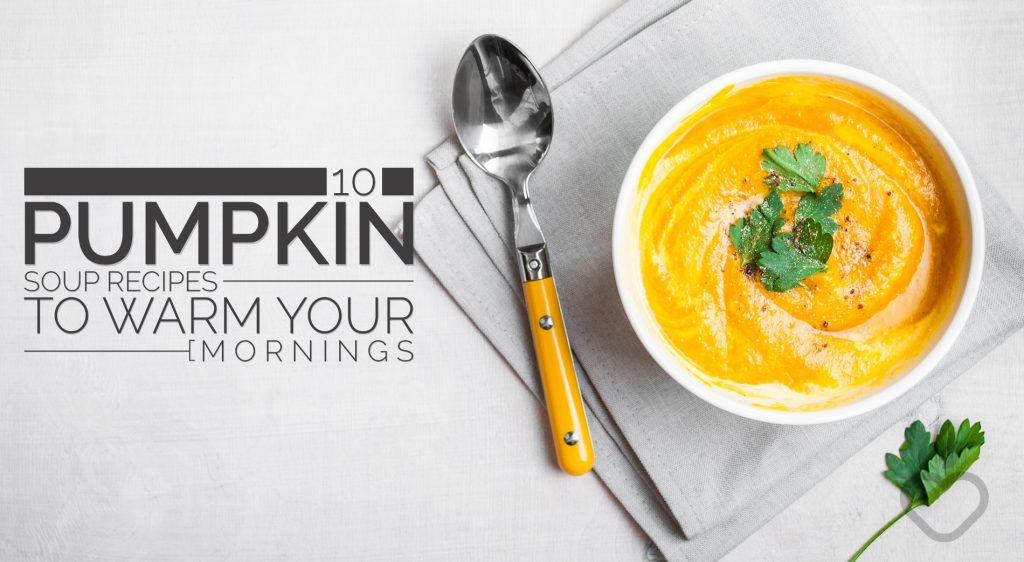 Pumpkin soup is an autumnal favorite, and it’s something that a lot of people enjoy having in the morning. While it’s not really a traditional breakfast food, the trend towards eating in early in the day has inspired us to share 10 pumpkin soup recipes with you today. Once you discover these recipes, you’ll be ready to whip up one or all of them.

Before we begin, we’d like to spend some time talking about the nutritional profile of pumpkin. It’s a delicious veggie, and it contains plenty of meat, so you’ll find that it’s simple to make a lot of soup from just one medium-sized pumpkin.

This vegetable’s “meat” smells heavenly and it’s a great option for vegetarians and vegans, too. Our recipes aren’t aimed at any particular group or style of eating. They are for everyone, and there is bound to be one which is just right for you. 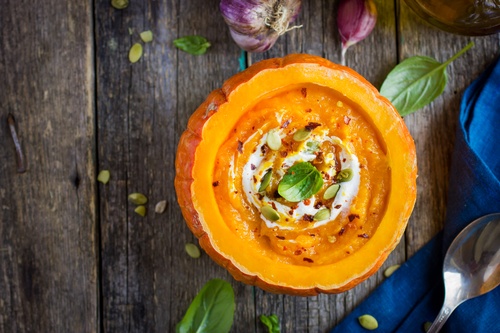 To make this popular recipe, for the morning or any time of the day or night, gather your ingredients. First, measure out six cups of chicken stock. Then, set aside one and a half teaspoons of salt. Next, you’ll need to measure out four cups of pureed pumpkin. Also, you’ll need a teaspoon of fresh parsley which is chopped, as well as a cup of onion which is chopped. As well, you’ll need half a teaspoon of thyme (chopped), as well as a minced clove of garlic and half a cup of whipping cream (choose the heavy style). Also, you’ll need five peppercorns which are black and whole.

To prepare the soup, heat up your chicken stock and add the salt, the peppercorns, the garlic, the thyme, the onion and the pureed pumpkin. Bring the mixture to a boil. Once it’s boiling, simmer it on low heat for half an hour. Don’t cover the pot while you simmer it. Next, puree the mixture in compact batches. Try one cup per batch and do the pureeing via your blender or food processor.

After all of the batches are pureed, put in back in the pot and boil it. Once it’s boiling, simmer it for another half hour, without covering it. Then, add the heavy cream and stir to mix it in. Use your fresh parsley as a garnish. 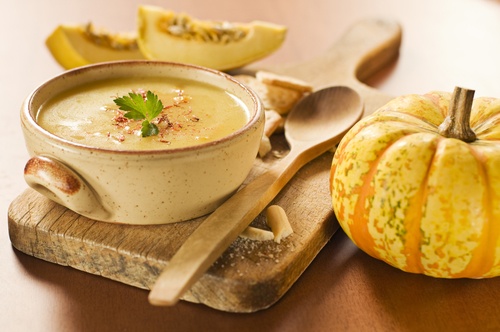 This recipe is so gourmet, and it’s a gluten-free option. To make it, gather a couple of sugar pumpkins to access two and a quarter cups of puree of pumpkin. Also, you’ll need a couple of shallots which are diced. As well, you’ll need three garlic cloves (minced) and a couple of cups of veggie broth. This recipe also requires a cup of coconut milk (light variety) and two tablespoons of maple syrup. To add more spice to this soup, you’ll also need one-quarter teaspoon each of salt, nutmeg, cinnamon and black pepper.

To make the soup, heat the oven to three hundred and fifty. Then, put parchment paper on a baking sheet. Next, cut the tops off of your pumpkins. Next, cut the pumpkins in half. Then, take a spoon and dig out the strings and seeds. After you complete the digging, brush the pumpkin “meat” with oil and put the pumpkins on your baking sheet, facing downwards. Putthe in the oven for forty-five minutes. Take them out and then let them cool off for several minutes. After this, peel the skin off and set these orange veggies aside.

The next step is adding a tablespoon of olive oil, the garlic and the shallots to a big pot which is on a medium burner. Cook everything for three minutes and then add the rest of the ingredients. Don’t forget the pumpkin. Bring the blend to a simmer. After you do this, add the mixture to a blender and puree it. Once it’s pureed, pour it back into the pot and heat through on medium to low heat, for about ten minutes. 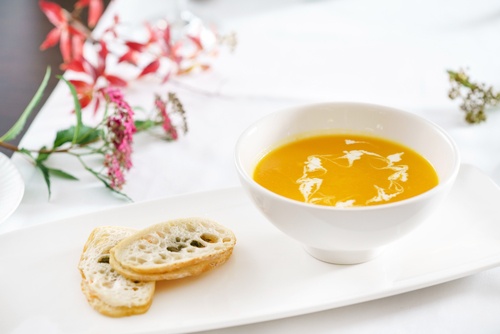 More ingredients aren’t always better. This simple, three-ingredient marvel gets rave reviews, and it’s so easy to make. As well, you won’t need to spend a lot to make it. To begin, gather your ingredients. You’ll need a smaller pumpkin of the butternut type, which weighs in at around six pounds. Your pumpkin should be de-seeded, and it should also be peeled and dices. As well, you’ll need a tablespoon of green curry paste (Thai-style), as well as one hundred and thirty-five milliliters of coconut milk (light type). To prepare the soup, you’ll need a stick-style blender.

To prepare, put your diced pumpkin in a big soup pot. After you do this, put in one liter of water which is freshly boiled. The water should just cover the diced pumpkin. Then, cook it with a lid in place until it’s soft enough to mash. After it’s mashed, use your stick blender to puree it to a smooth and creamy texture. Don’t worry about getting rid of the water you used. It becomes part of the soup. Next, put your pot on low heat again and simmer. After this, put in the curry paste and coconut milk.

Make a Pumpkin Soup with Onions 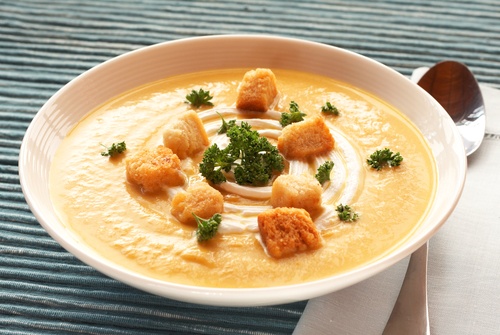 If you love pumpkin and also enjoy eating onions, you’ll love this version of pumpkin soup. To make it, you’ll need a one-kilogram pumpkin which is chopped into big pieces. Make sure the skin and seeds are taken away. You’ll also need a couple of onions of medium size, which you should slice. As well, you’ll require a couple of cloves of garlic and three cups of stock (chicken is best). Lastly, you’ll need a cup of milk and some salt and pepper.

The first preparation step is combining all of your ingredients, save the pepper and salt, in a big pot and bringing the ingredients to a boil. After this, turn down the heat and simmer the mixture until the pumpkin is soft. After you do this, take the pot off of the burner and blend its contents with your stick-style blender. Make sure it’s all smooth. Add salt and pepper to taste, and you’re done! 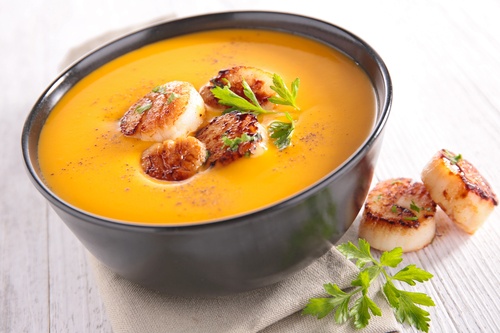 This recipe is easy to make, so it’s a great choice when you don’t have a lot of time to play around in the kitchen. Start by grating an onion of medium size. You’ll also need a couple of tbsp. of Olive oil, as well as a twenty-nine-ounce can of pumpkin puree. Also, you’ll need two can of chicken broth or four cup’s worth, as well as half a cup of cream (heavy type) and three-quarters of a teaspoon of salt. Lastly, you’ll need a couple teaspoons of pumpkin pie spice mix.

To prepare the soup, heat your oil in a pot. Medium heat works best for this stage. Then, put in the onion and cook it for about three minutes. Next, add your pumpkin puree, as well as the broth, the pumpkin pie spices, the cream and the salt. Cook for a few minutes until it’s heated through. Once this step is complete, it will be ready to serve.

Enjoy a Savory Bowl of This Tasty Soup 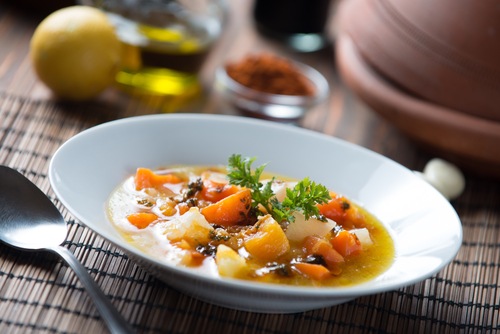 Regarding preparation, it all starts with combining your broth, frozen niblets of corn and diced onion in a soup pot. Bring these ingredients to the boil, using the highest heat. Next, lower the heat to asimmer and then put the lid on the pot. Cook at this low temperature for fifteen minutes. After this, add the pumpkin one spoonful at a time and blend with a whisk tool. Cover the pot and simmer for another ten minutes. Lastly, add your cream and the thyme, pepper, and salt. 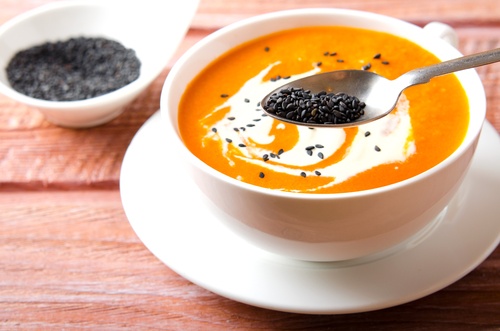 To make this recipe, you’ll need four tablespoons of Olive oil, as well as two finely-chopped onions. Also, you’ll need a kilogram of pumpkin which has been de-seeded, peeled and cut into large pieces. As well, you’ll need seven hundred milliliters of veggie broth, along with one hundred and forty-two milliliters of cream (double style), and four slices of bread (wholemeal and seeded is best). Lastly, you’ll need several pumpkin seeds.

To make the soup, heat up a couple of teaspoons of your oil in a big pot. Cook the onions in the oil for about five minutes. Then, put the pumpkin in the pot and cook for another eight minutes. Use medium heats for these two steps. The pumpkin should get soft and look golden. After this, add your stock and salt and pepper to taste. Boil everything up and then turn down the heat. Simmer for about ten minutes. Your pumpkin should be quite soft after this step is complete. Next, add the cream, boil up the pot’s contents again and then take them off heat and blend them via your hand blending tool. Saute the pumpkin seeds and add as a garnish before serving. 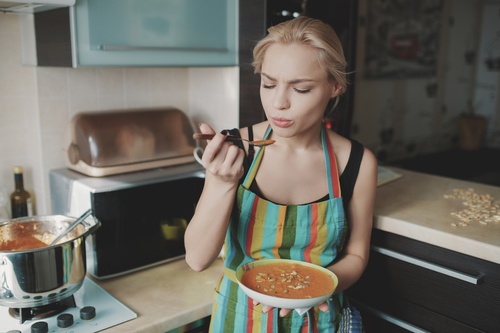 To make kid-friendly pumpkin soup, gather a pumpkin of the butternut type and then peel it, de-seed it and cube it. Next, take a big potato and peel and cube it. After this, take a big carrot and peel it. Then, chop it up. Next, dice a medium-sized onion and set aside a couple of teaspoons of extra-virgin olive oil. You’ll also need four tablespoons of a chicken-flavor stock powder.

To make this pleasing soup, heat up oil in your pan and then fry your veggies until they have a golden look. Next, add a couple of liters of boiling water and then add your stock mix. Bring your mixture to a boil. Simmer it for twenty minutes. After this time has elapsed, your veggies should be quite tender. Next, blend everything (away from heat) and make sure that your soup is very smooth. Add salt and pepper to taste and then serve. 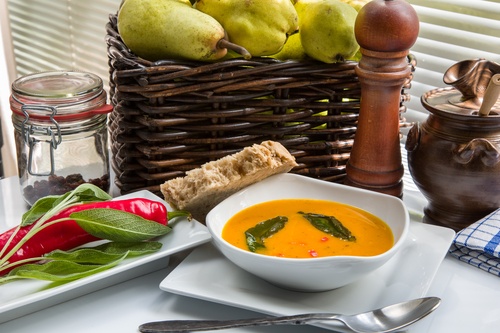 Preparation will be simple. Add your butter to a pot and then fry your onions in it. Once onions become a bit translucent, add the potatoes as well as the pumpkin. Cook everything on low heat. Next, add water and bring your veggies to the boil. Add salt and pepper according to your taste. After the veggies are cooked, cool them off and then puree them via your blender. Reheat in the pot you cooked them in and stirred in a little cream right before you serve.

Make your Own Version 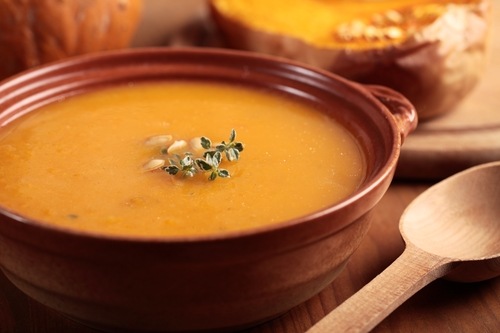 We’ve shown so many awesome recipes here. Choose one of them and then add your own spin to it. For example, add different spices or a different veggie to make it your own. Try a little cream if the recipe doesn’t call for it. Playing around is such a great way to express yourself in the kitchen, and you’ll find that it’s easy to adapt basic pumpkin soup recipes to whatever ingredients you have on hand.

Hopefully, you’ve enjoyed our top ten list. We hope that you try one or more of these wonderful pumpkin soup recipes, whether you eat them in the morning or at other times.