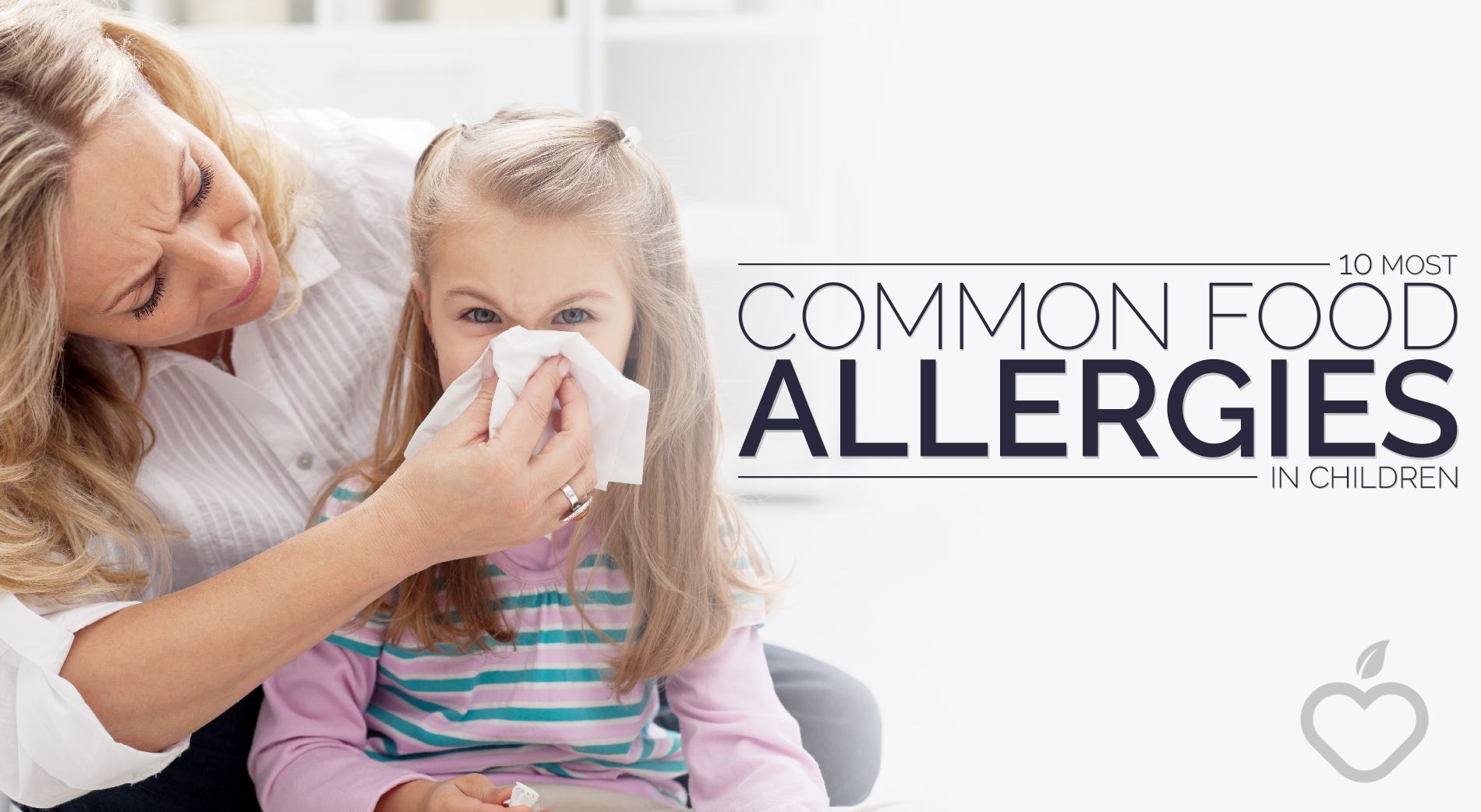 Everywhere you look there are allergy warnings on food. That’s because there are more allergies out there than ever before. More people suffer from ingredients that shouldn’t react with the immune system.

There are 10 food allergies that are highly common in children. Nobody understands where the allergies have come from or why more people suffer from them now than before, but we do know that they are around. By knowing more about the allergies and the ones your children are likely to suffer from, you can be proactive.

It’s possible to learn the symptoms and make informed decisions over the ingredients you use in your food. You can also make informed choices about food that you serve at parties or when you arrange play dates.

This is the list of 10 most common food allergies in children to watch out for. This list is in order of likelihood.

Milk and Other Dairy Products 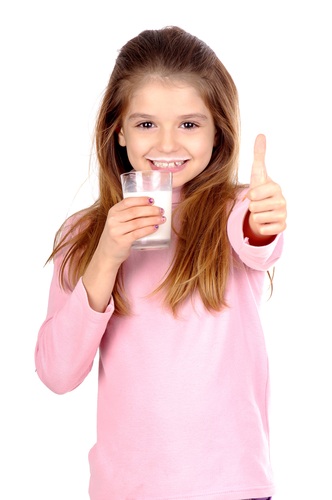 Most people believe that peanuts are the most common food allergy on the list, but that isn’t quite true. More children are likely to be allergic to milk and other dairy products. It’s also one of the most commonly diagnosed extremely early since all babies survive on is milk! Most children will develop the allergy within the first year, which can make feeding hard.

There are a couple of things in dairy that set off allergies, but it’s the lactose that is the biggest issue. Some people will find out they’re lactose intolerant, which isn’t quite an allergy. The body just has an issue with breaking down the sugars and elements within lactose, leading to gas, bowel issues, and bloating.

A dairy allergy is much more serious. The immune system fights against the elements within lactose and dairy, viewing the components as bad for the body. This leads to inflammation and white blood cells, which can cause severe shock and damage.

The good news about milk allergies is that 80% of children will outgrow it! The immune system changes and realizes that the milk and dairy aren’t as bad as initially thought. The same can be said for some other childhood allergies. 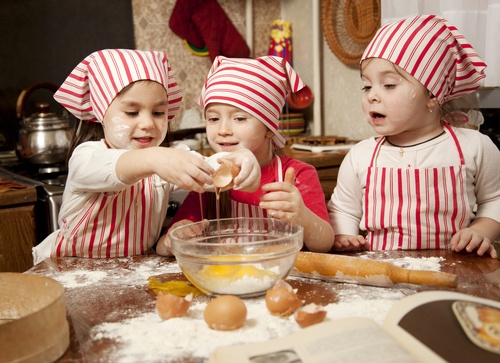 Eggs are considered important for the diet. While they once got a bad reputation for cholesterol levels, scientists realized that the cholesterol was good and there was plenty of protein. Eggs become a quick staple in the diet since they are easy to eat.

In fact, egg allergies are often one of the first diagnosed. When parents wean their babies from the milk, they will move onto eggs. You can make scrambled ones, which are extremely easy to chew and swallow.

While protein is good for the body, there are some proteins in eggs that cause the allergic reaction. Sometimes the reactions are so mild that they are overlooked, but they can also be extremely severe and life threatening. The protein is usually only found in egg whites, but there’s no guarantee of contamination in the egg yolk. It’s best to avoid all eggs.

Peanuts (But Not All Nuts) 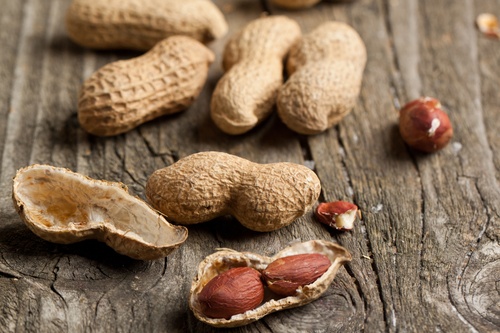 Despite the word “nuts,” peanuts are not classed as a nut. They are a legume and a type of pea. So, children and adults who are allergic to peanuts are not necessarily going to be allergic to other types of nuts. You will want to play it safe at first, but your doctor will be able to help with the exact diagnosis.

Peanut allergies are extremely common. They are among one of the most, and one of those that will remain an allergy for life. The severity of the allergy can range from mild to severe. Some children will only have reactions when they eat peanuts, while others will have a reaction when someone near them eats peanuts. The particles get into the air, and their immune system reacts.

There are so many with peanut allergies now that there are warnings everywhere. Anything with even traces of peanuts will be labeled. In some parts of the world, companies make a point of promoting when their food comes from a peanut-free factory.

This allergy is the deadliest of all allergies. 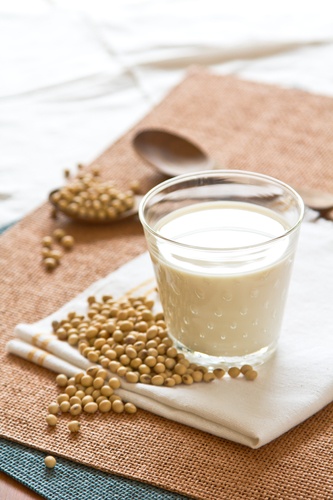 Those with a milk allergy will likely turn to soy milk. This is because it’s the next best thing and formula products are often created with soy if they can’t be made with dairy. The problem is there are children who are allergic to soy. It’s the fourth common allergy on the list.

The great news is that it’s another allergy that is often outgrown. Most children will stop suffering from it from the age of 10, but you will need to get a test to make sure that this is the case.

Like all other allergies, the severity can be a range. Some children will react mildly when they eat something with soy.

The allergy won’t just mean from the soy bean, but from anything that uses soy in it. It’s not an ingredient that is always put on a warnings label, so you will need to consider the actual ingredients list. 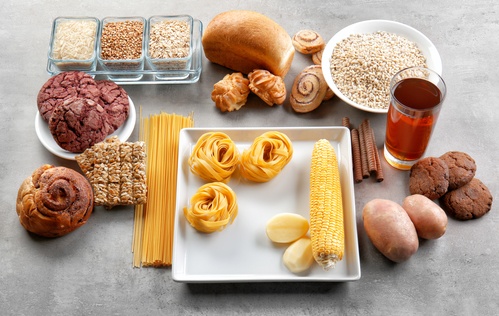 This allergy won’t surprise many of you, but it is an allergy that mostly affects adults rather than children. However, the seriousness among children is growing.

Most children with a wheat allergy will outgrow it. However, some may remain intolerant to it, which means having to be careful of the food that they eat. They can end up with bloating and digestive issues if they eat anything that has wheat, rather than the full allergic reaction.

This type of allergy is often mistaken for celiac disease. Celiac disease is focused on the gluten rather than the wheat! Gluten is found in much of wheat products, so it is understandable why the two are often confused.

Food with wheat will be labeled. The wheat allergy in childhood can be so severe that the whole family should avoid wheat in the house. 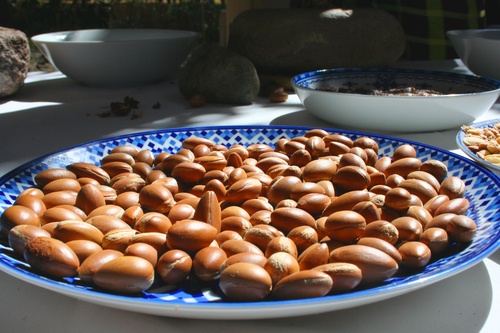 While peanuts are not a nut, you’re not necessarily going to avoid a nut allergy in the house. Tree nuts are one of some fatal types of allergies around, but they are not one of the most common.

This is one of those allergies that tend to be inherited. Younger siblings of those with allergies are more likely to show some of the same signs, although the severity may be lower. It’s worth getting tested just to make sure. 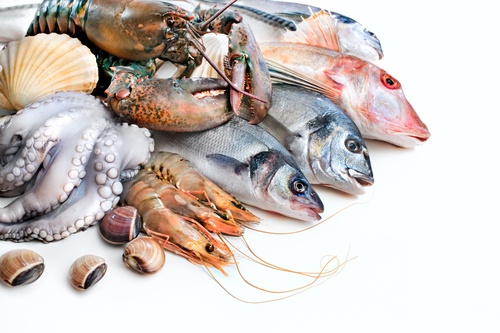 Some children will show allergic reactions to a specific type of fish. Tuna or salmon are among the most common since they are usually the most likely eaten from a young age. After all, who doesn’t love tuna, sweet corn, and pasta?

If children are allergic to one type of fish, they are likely allergic to others. However, they may be allergic to specific fish families. The actual allergy isn’t fully understood yet, but it is linked to the proteins within the creatures. Playing it safe will be one of the best things you can do.

Unfortunately, this is an allergy that isn’t commonly outgrown. It can also get worse over time, with some children getting reactions just from fish being cooked in the room!

Fish allergies can be developed later in life. It’s the opposite of when children outgrow the allergies, as the immune system starts to see the proteins as an enemy. 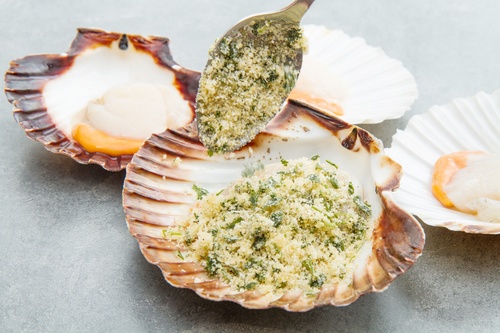 Shellfish is another that the child will not outgrow. The severity ranges from mild to severe, with some children unable to be around any shellfish. Just opening packets or cooking the food can lead to particles going airborne and causing a problem.

You will usually see a warning on products that include shellfish. It can also be worth avoiding the mock-up crabsticks. They can use flavorings from real shellfish, bringing some of the proteins over.

Annoyingly, shellfish allergies can be developed over time. Your children may be happy eating shrimp, but then suddenly start to see reactions in adulthood. It’s something to make your children aware of, especially if you have others in the family allergic to it.

Strawberries (But Not Other Berries) 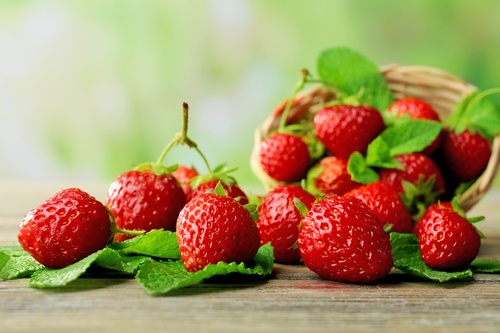 This is one of the most surprising childhood food allergies. It’s also one of the hardest. Children adore strawberries. They’re juicy, naturally sweet, and summery.

Like with many of the allergies mentioned above, it’s the proteins in strawberries that cause a problem. And it’s only in the strawberries. Other berries and similar fruits will often be perfectly safe for children. The immune system reacts to the specific proteins within the fruit.

Before allowing your children to eat strawberries by the tub full, make sure you introduce them carefully. Allow them to eat a small amount and look out for any reactions. The allergy isn’t one that most parents will expect.

Whether children outgrow strawberries are unknown, but it is unlikely. The issue is the protein, which is like fish and egg allergies. The immune system doesn’t get used to the protein very well.

Opt for raspberries, blueberries, and cranberries in the house instead. They can give a similar summery feeling and help to offer something naturally sweet and delicious. 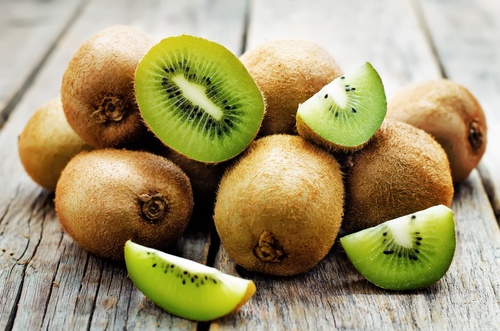 There’s another fruit to look out for kiwis. This exotic fruit is common in children who already have other allergies. However, it can be an allergy within itself (it’s just not as common).

There are proteins that react with a child’s immune system. The acids can also react. Some children will break out in a rash around the lips when eating the fruit, while others have more severe reactions. The allergy sensitivity can also get worse over time.

This isn’t an allergy that children are likely to outgrow. The good news is there are plenty of other fruits out there that can replace the kiwi.

Looking Out for Food Allergies in Children

Now that you know the 10 most common food allergies in children, it’s time to look out for the signs. There are four parts of the body that are often affected by the foods.

Watch out for rashes. Encountering the foods by hand can lead to rashes to appear. You may also see them around the mouth and in other parts of the body exposed to the particles. The allergy signs are usually small red bumps, swelling, and redness, or even eczema. At first, it may be difficult to diagnose as an allergy and may be confused with something else.

The tongue and mouth may swell. This can cause the airways being blocked, leading to life threatening conditions.

Look out for digestive pain. Many of the allergies when minor can react within the digestive system. You may feel nauseous or suffer from pain. Changes to the bowel movements, especially loose stools, can be an issue.

This is because the digestive system struggles to break down the proteins and the food. If children outgrow the allergy, they may still suffer from some intolerance and suffer from digestive issues.

Check for respiratory problems. The throat swelling isn’t the only problem for the respiratory system. Think about the symptoms you get when suffering from hay fever. These are the allergy symptoms and can appear with other allergies. They are very common in those with severe allergies, where the airborne particles cause a major issue.

Allergic reactions in children are serious. They can occur from the first day or may develop over time. Some will go away, and others will just get worse. Know the common 10 above and introduce the foods to your children carefully.

Everything You Need To Know About The Clean 15

The Complete Guide to Genital Warts

How Food Allergies Affect Weight Gain (All You Need to Know)