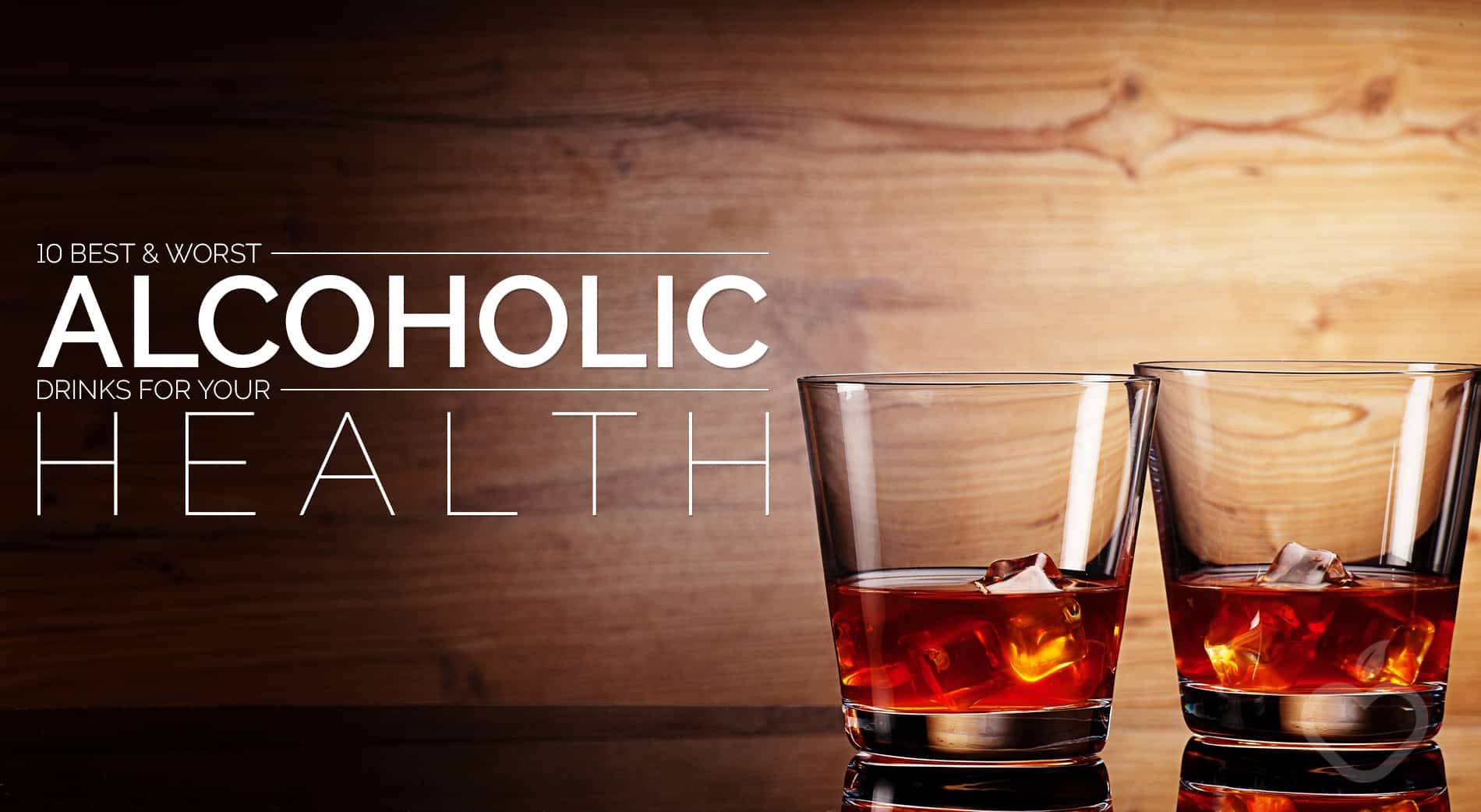 When someone says that alcohol isn’t good for the body. It doesn’t come as a big surprise. There are a lot of reasons why people shouldn’t be drinking excessively although some people still do.

Alcohol is a mind-altering substance that a lot of people consume without thinking about the long-term health risks. According to research, women who drink alcohol as little as once per day increased their risk of developing different kinds of cancer.

One major problem with alcoholic drinks is that they’re usually loaded with calories but not with nutrients. Typically liquors like whiskey, gin, and vodka are pure calories and nothing else. On the other hand, alcoholic drinks like cider, wine or beer do contain some minuscule amounts of the foods they’re made from. This gives them a very minimal amount of nutritional value, but still not enough to be considered as healthy.

Even though alcoholic drinks have done more harm than good to people’s bodies, many people still choose to drink them. For a lot of people, getting drinks with their friends is a way to unwind and de-stress. Often, it can’t be helped. What a person can do is choose “healthier” alcoholic drinks when going out for drinks. Here are some of the best and worst choices for alcoholic drinks:

People who want to remain healthy even while drinking alcohol may choose to order simple drinks. Such drinks are meant to be consumed in little sips to last for a long time. Drinking this way would also help one avoid hangovers. Here are some choices for “healthy” alcoholic drinks: 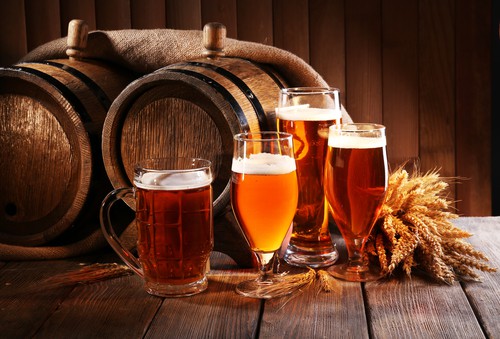 When choosing beer, you need to be very careful. A lot of beer varieties are packed with sugar and calories. If you want to drink some beer, make sure to choose a light lager or other beer varieties which contain fewer calories. You can usually check the caloric content on the beer bottle’s label. Check out more info on best low carb beer for diabetics here

One way to have drinks without the excess sugar and calories would be ordering drinks “up” or “on the rocks.” The former means you’ll receive your alcoholic drink chilled. The latter means your drink will come to you with ice.

When ordering such drinks, take your time in drinking. Nurse the drink by taking gradual sips. This would give the body a chance to process the alcohol at a rate that’s much safer.

A lot of people may not know this, but the Manhattan is surprisingly delicious. These drinks are made with bourbon or whiskey, Angostura bitters, and sweet vermouth. Such a drink contains about 130 calories, but usually, one drink would suffice. 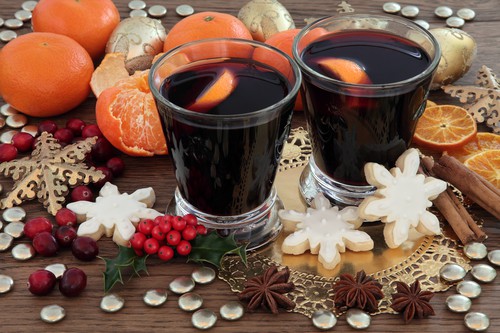 This is another potentially healthy type of alcoholic drink. To make mulled wine, you’d need some wine, apple cider, and a variety of herbs and spices with low calories. When you mix these ingredients, you’ll come up with a tasty concoction. Although some people also add sugar to the mix, it can be limited to just 1 teaspoon per serving.

If you want to choose a drink with the least possible amount of sugar and calories, you may order one “neat.” This means that you’ll just be ordering one of the liquors in a glass, straight up and not blended with any other components.

Keep in mind though that when you order a neat drink, it won’t come with any sweet ingredients to tame the flavor or the strength of the alcohol. This means that you may experience the “buzz” a lot sooner than when you order a mixed cocktail. Of course, such drinks should be sipped little by little and not downed like shots.

Red wine may be healthy because it doesn’t contain wheat. So, when you drink it, you won’t feel bloated after. Also, red wine contains tannins, which may be good for the heart when consumed in moderation. 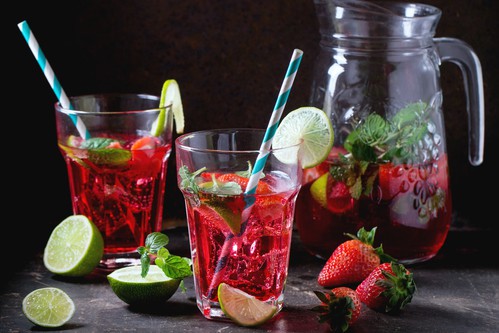 Sangria is considered as a “healthy” option because it’s mixed with fresh fruits. Simply mix some wine with a variety of fruits to create a cocktail that contains a lot of antioxidants. Just make sure you don’t drink more than 2 glasses of this cocktail to avoid excessive alcohol in your system.

Tequila On The Rocks

We don’t mean consuming too many tequila shots in one go! Simply order tequila on the rocks and drink it slowly. This is a healthier option as tequila doesn’t contain any carbohydrates.

This is a variation of the more popular vodka tonic. It’s a healthier choice as seltzer doesn’t come with additional sugar content. However, some people may find this a bit boring. To jazz up the drink, an orange, lime or lemon wedge may be added. This adds some vitamin C and a citrus flavor to the drink without the guilt. 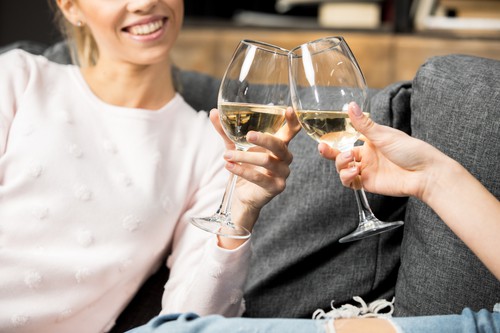 Drinking a glass of white wine can help a person unwind with his friends while still “going out for drinks” with them. White wine usually contains fewer calories than red wine. They also don’t contain too much sugar. This is because, during the fermentation process, the sugar from the fruit sources gets converted to alcohol.

As you can see, there are a few good choices for alcoholic drinks which are healthy. Also, to lessen the effects of drinking on the body, one may drink a glass of seltzer or water in between drinking alcoholic beverages. This also lessens the risk of having a hangover the next morning.

In general, alcohol and alcoholic drinks aren’t good for the health. This is because they won’t make a person healthier. In fact, such drinks may even be detrimental to the health especially when consumed excessively. But the reality is, some people cannot avoid such beverages altogether. Whether they want to drink at home or drink with friends, there are some alcoholic drinks one should avoid because they’re unhealthy.

Mainly because of the sour mix added to the drink, an amaretto sour can contain as much as 300 calories per serving. It also contains a lot of sugar in each drink, so it’s best to steer clear of this alcoholic beverage as much as possible.

Many people love beer, but only a few people know that beer is typically loaded with sugars, carbohydrates, and other unnecessary calories. Although not all types of beer are unhealthy. There are light variations which may contain fewer calories. However, people make this an excuse to drink more! 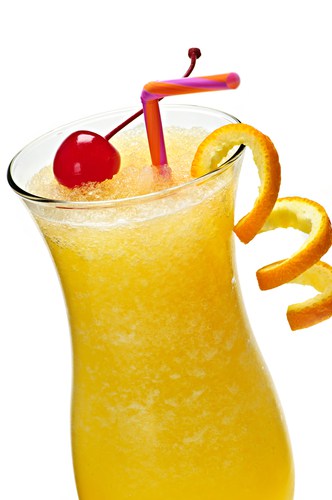 Some bartenders take simple drinks and combine them with different ingredients, creating unhealthy concoctions. Take daiquiris for instance. Traditionally, this drink would contain lime juice, rum, and some maple syrup. Then it’s chilled and served. It’s easy to make and delicious too.

But some people think this is too complicated to make, and so they go for the ready-to-drink mixes available in stores. They pour the mixes in a blender, add a lot of ice, and blend the daiquiri to make a blended, frozen drink that’s loaded with calories and artificial ingredients. Such drinks would contain at least 280 calories.

Although quite popular among alcohol drinkers, cocktails are very unhealthy. This is because they usually contain a lot of sugar. A person who drinks too many cocktails may be at risk for weight gain, diabetes, heart disease, and other health issues.

There are some drinks which taste like dessert and are very unhealthy. This should be obvious, but some people prefer the drinks because of how they taste. Let’s illustrate this with an example. The White Russian cocktail contains about 300 calories per serving. This is because of the Kahlua, vodka, and heavy cream. Yes, it tastes good, but it also contains unhealthy components. Also, steer clear of drinks which are labeled or contain “Irish cream.” These contain a lot of sugar as well as fat.

Sometimes people mix then drink energy drinks with alcohol. One example is Red Bull with vodka. Unfortunately, this isn’t just unhealthy; it’s quite harmful. This is because the energy drink makes the effects of alcohol stronger.

A lot of people think that fruity margaritas are healthy because of the “fruity component.” This would be true if the drink is mixed with fresh fruits. However, this isn’t usually the case. Fruity margaritas served in bars, and similar establishments are usually made with pre-made fruit mixes. These contain fructose corn syrup and other artificial flavorings.

This type of drink is usually served in a large glass. People don’t think much of this drink, but in fact, it contains a lot of calorie-loaded components. A Long Island iced tea may contain rum, vodka, tequila, triple sec, gin, cola, and sour mix. At its worst, this drink would contain as much as 529 calories!

Although popular, this drink isn’t healthy at all. In fact, just one piña colada contains a lot more calories than a McDonald’s Big Mac! 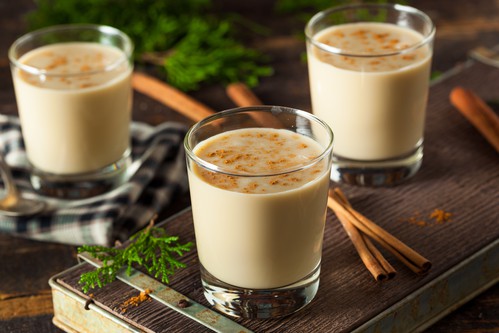 Eggnog is a common drink which is made with cream, eggs, and sugar. That already contains a lot of calories. But when you add alcohol to the mix, it contains up to 450 calories in each serving. That’s a lot!

How Does Alcohol Interact with a Person’s Body?

Few people know that the alcohol they drink is a type of ethanol. When this ethanol is consumed, it makes a person drunk. When a person consumes alcohol, it moves through the body in the blood. Then, it goes to the liver which breaks it down and uses it for energy.

When a person consumes excessive amounts of alcohol or consumes too much, it may result in an increased amount of fat in the liver cells. This then results in liver illnesses and diseases. Aside from this, alcohol also has some effects on a person’s brain.

As a person keeps drinking, the ethanol starts to inhibit the ability of brain cells to communicate with each other. This lack of communication between the brain cells is responsible for the “drunken” sensation a person feels when consuming alcohol.

Drinking alcohol has short-term and temporary effects on the brain. But when a person drinks alcohol frequently and in excess, it may result in permanent changes in how his brain works. Such abuse of alcoholic beverages is even linked to brain damage, weakened brain function, and dementia.

It’s also important to note that alcohol contains huge amounts of energy. In fact, next to fats, alcohol is the second type of macronutrient which contains the most energy. Each gram of alcohol contains a whopping 7 calories!

Because of this huge energy content, drinking too many alcoholic drinks may affect a person’s weight, no matter what kind of beverage a person drinks. That’s why chronic alcohol abuse is commonly associated with a variety of illnesses and diseases. These health effects aren’t significantly related to the type of alcohol, but to how much a person consumes.

As you can see, alcohol can truly be detrimental to the health. But this doesn’t mean that people should cut it out of their system completely. However, if one can do that, all the better! Realistically though, most people would turn to alcohol at one point or another and for different reasons.

So, the best thing they can do is choose the “healthier” beverages over those which contain alcohol along with other artificial or calorie-loaded components. In doing this, they may still enjoy the drinks without feeling too bad about it.

Pregnancy and Hypertension: 7 Reasons Why You Need to Be Extra Careful

The Ultimate List of Bad Foods You Eat Every Day