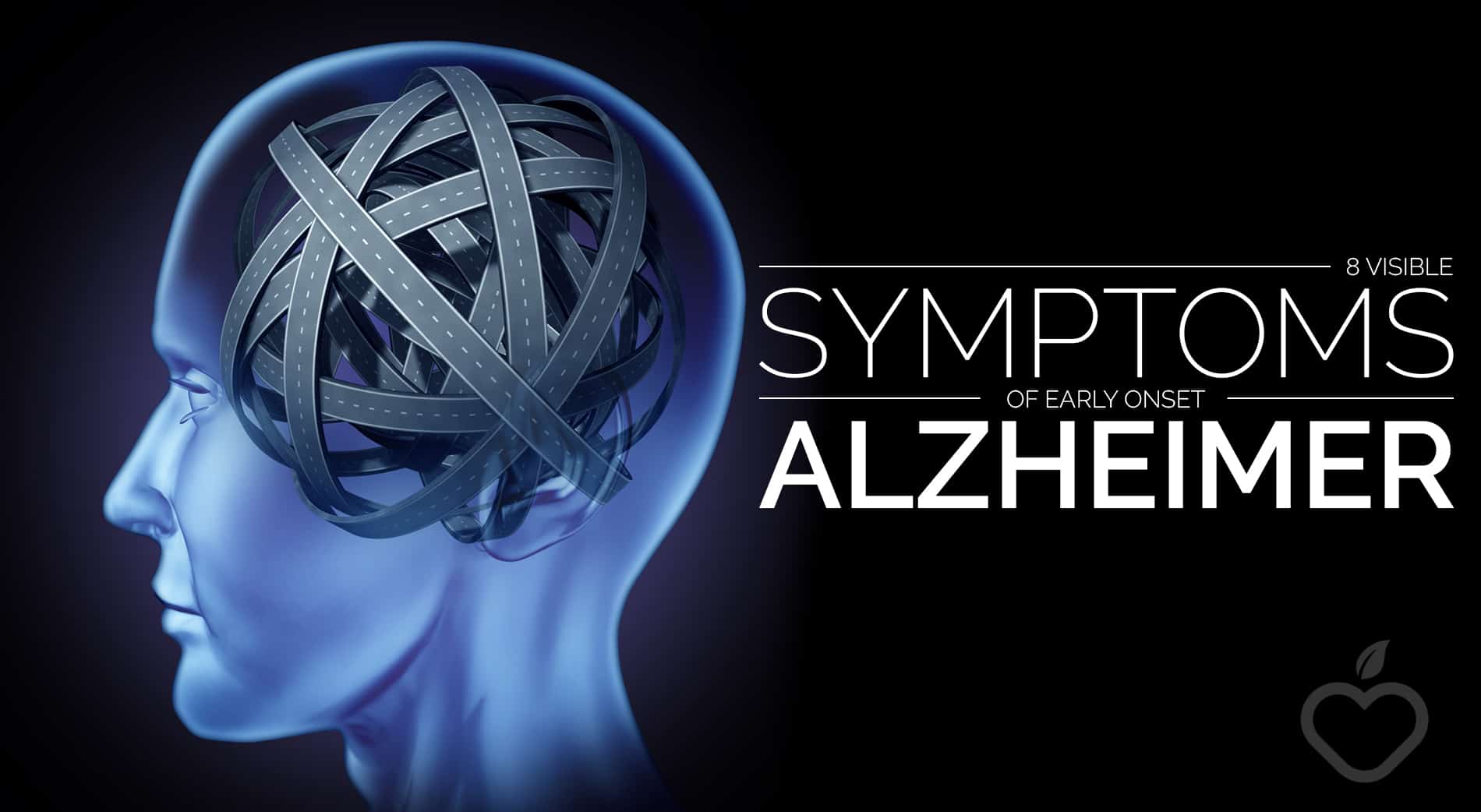 You’ve likely heard of Alzheimer’s disease. It’s a form of dementia that can be extremely devastating for families. Many people act like it will never happen to them or assume that it won’t be a problem until later in life. However, Alzheimer’s is one of those conditions that really can affect you at any time.

Early-onset Alzheimer’s can affect up to 5% of patients. While most people are affected from 65 years, the 5% are often diagnosed between their 40s and their 50s. It’s difficult to get a diagnosis that early too, so the figures could be higher.

While doctors are looking into the reasons for Alzheimer’s and a cure, there are others who want to understand more about the symptoms. This can help to seek medical help as soon as possible and figure out steps to take should you or someone you love suffer from early onset Alzheimer’s.

Some of the symptoms are mentally, but there are also visible symptoms. These are ones that you or someone close to you may notice. Here are eight visible symptoms of early-onset Alzheimer’s disease to look out for. 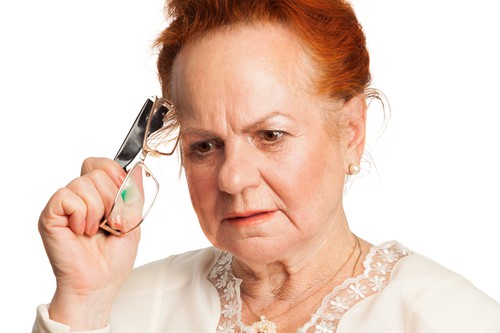 Familiar and everyday tasks can become a problem. Alzheimer’s affects the memory and the cognitive functions. The concentration is one of those cognitive functions affected. It’s harder to remain focused on daily tasks at hand, causing a distraction in the middle. This can initially seem silly and inconsequential, but it can eventually be extremely dangerous.

For example, you may find driving difficult. It’s possible to lose concentration part way through, forgetting to stop for a pedestrian or missing the stop sign. Getting lost is more likely, as you can forget to take a turn or become distracted and find yourself on the wrong road. This can happen on routes that you regularly travel.

Then there are issues when doing tasks that are normal in the house. You can find it hard to balance the checkbook, pay the bills, or even cook dinner. The distractions get worse over time.

Doing everyday tasks is also affected due to the memory losses. People can start to forget how to do the tasks. They forget about the steps to take, the timings for cooking, and even the times that they were supposed to do the tasks.

Most people will initially find working with numbers harder before working with letters. Therefore, the bills and the checkbook can be the issue. However, you can find English and wording become problems.

Struggling to Find the Right Word 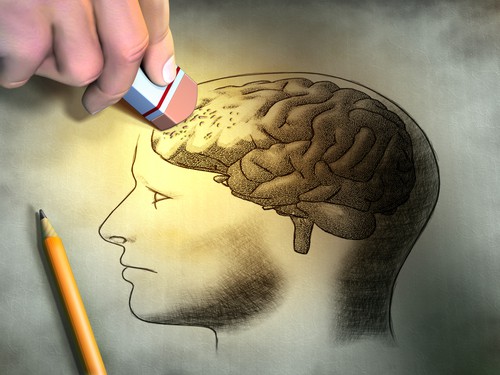 Over time the memory struggles to contain information. The pathways don’t work properly and you can start forgetting things. One of the visible symptoms is difficult with wording. You can find it different to get the right word. The word is right there on the tip of your tongue, but you just can’t form it coherently in your head.

But isn’t this something that happens to all of us? There are times that we know the word we want but we just can’t figure it out. We need to find a way to describe the word to others in hope that they can think of it.

But Alzheimer’s symptoms are more than just not being able to find the right word. The whole sentence can be forgotten. Someone can stop in the middle of a sentence because they can’t remember what they were going to say. Or they struggle for so long on a particular word that they can’t remember why they needed it in the first place.

This can often lead to repetitive conversations. You know that you’ve discussed something before, but you may not remember who with. In some cases, the conversation repeats to help get back to the word that was difficult. 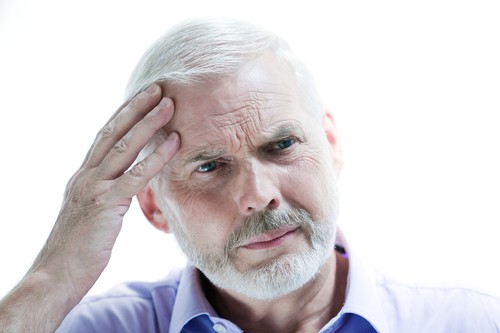 It’s common for people to forget dates and times. There’s only so much information that we can keep in our heads, so we have to write them down. There’s nothing wrong with this. However, one of the symptoms of early onset Alzheimer’s is struggling to remember or determine dates, times, and places.

You may plan future events, but it’s hard to remember about them because they don’t take place. Some people will get the venue or date wrong. Others will need reminding that there is an event.

This problem gets serious as the condition advances. People can forget where they are at a current time. This makes traveling alone dangerous, as they can’t figure out how to get home or whether they are safe. It’s common to start panicking, while your brain tries to help them figure out everything they need to know.

People will end up at a location and have no idea why they are there. They thought about something and started acting on that thought. It’s important to do a task while they remember. The problem is they forget during the time they are doing the task or making their way to a location. 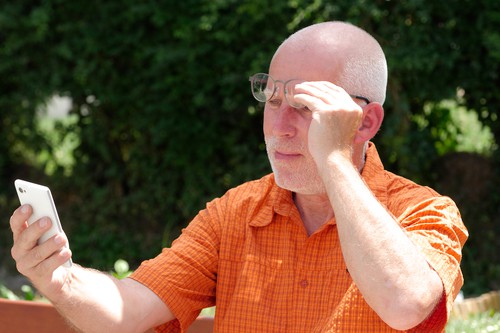 Early-onset Alzheimer’s can also lead to some vision problems. At first, the physical symptom can be pesky. Most people won’t even realize that it links. It’s only as the condition and vision problems advance that connections are made.

The brain affects the eyes. It’s possible to affect the ability to judge distances or depth, making it more likely that someone will walk into objects. They can find it hard to judge how far away to reach to put their coffee on the table or have issues with sitting down on chairs, leading to things falling on the floor.

Over time the vision issues get worse. Some people have problems with color differences and contrasts. They can get colored candies mixed up and even struggle with the traffic lights.

Most patients with dementia and Alzheimer’s won’t go blind, but they can struggle with parts of their vision declining. This becomes difficult to comprehend, as their memories go blank trying to figure situations out.

Difficulty Remembering Where Items Are 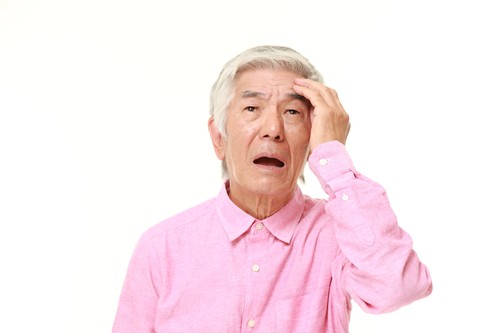 How often have you misplaced your house keys or wondered where you put your phone? These are two items that are regularly misplaced in the house. Some people even find that they’re holding the items they’re looking for!

While it is a common occurrence, it’s also a physical symptom of Alzheimer’s. However, it’s more serious than just temporarily putting items down and then forgetting where. People start putting items in unusual places. This makes it harder to retrace the steps and figure out where an item is. They can’t just look in the usual places because the items haven’t even been out there.

Some examples could be putting the coffee jar in the fridge instead of the cupboard or placing their house keys in the cookie jar. They can put money in the bathroom cupboard when usually it went in a box on a shelf or under the mattress.

It’s very common for people with early-onset Alzheimer’s to jump to the wrong conclusions because of the misplaced items. For example, someone may jump to the theory that their money is being stolen, not that they’ve put it behind the milk for an unusual reason. 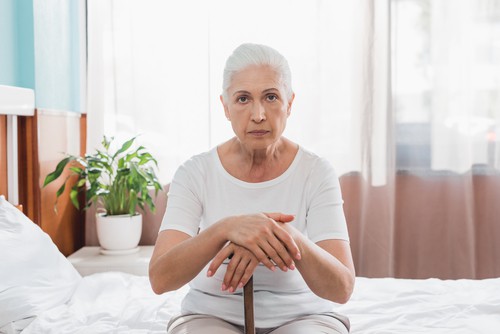 People that start to suffer from memory issues can start to withdraw. They avoid social events or work-related activities. Sometimes this is because they’re embarrassed about events that have happened. They may have forgotten to do something at work and decided the best thing to do is avoid the possibility of discussing it.

Another reason could be because they’ve forgotten. Remember that one of the visible symptoms is struggling with locations and dates. They may not have remembered the event was happening. When you try to call, they may struggle to work out why or have decided to do something else and not hear it. Or they realize they’ve forgotten something and are too embarrassed to say anything.

Hobbies that were once important are no longer attended. People choose not to go to knitting or book club and they stop meeting their friends for drinks at the weekend. Everyday events can be forgotten about. It’s not that they didn’t want to go, but the patient may have forgotten the day of the week, the time, or even that they had planned an activity.

It’s not that they don’t want to, but their illness is affecting them. Unsurprisingly, the lack of social events can cause a further decline in the mental health. They don’t get the stimulation, so the brain’s decline continues and all the symptoms continue to get worse. 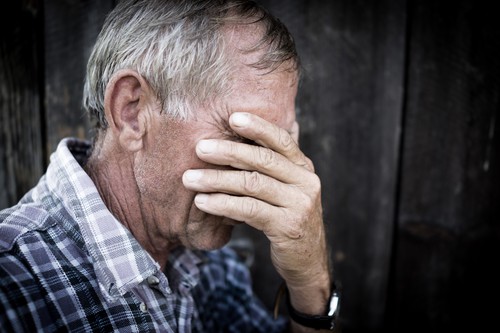 Making decisions gets harder with early onset Alzheimer’s. Remember that the disease makes it harder to manage numbers and money. This can lead to making financial decisions extremely harder. However, it’s not about making it hard to keep track of bills or balance a checkbook. Someone with Alzheimer’s can make poor judgments when it comes to giving donations, saving money, and talking to telemarketers.

If they’re called by telemarketers, they are more likely to give away their life savings. People with Alzheimer’s are more likely to fall for scams. They don’t notice the red flags as much, and scammers have no care in the world who they’re stealing from. It’s not like they’re going to give back the money. People with this form of dementia are also more likely to make bad investment choices or poor financial savings decisions, whether it’s giving money to family members, hiring a financial advisor, or getting into questionable stocks.

And the poor judgment isn’t just financial. They can suffer from poor judgment in their appearance. They don’t care so much about grooming or cleaning, so they can look unkempt and suffer from bad body odor. They can appear lazy, but it’s actually that they’ve forgotten or their disease has taken over. 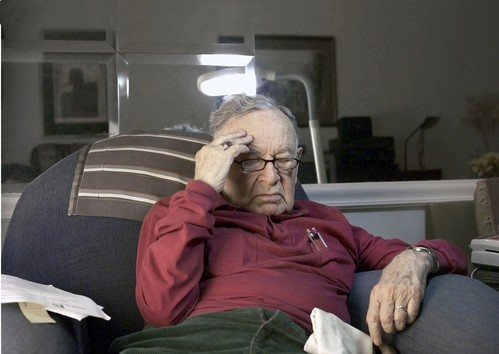 One of the visible symptoms is when the personality or moods change. People with Alzheimer’s are more likely to become confused and anxious. Early onset patients can be embarrassed, angry, scared, and even depressed. Not only do they not really understand everything that’s happening, but when they figure it out they are angry about it. They can’t understand why it’s happening to them, especially so soon.

People become angriest with the people closest to them. When they’re thrown out of their comfort zone or picked up on poor decisions and lack of judgment, they go on the defensive. It’s normal to start attacking those who have called them out. While some of the personality changes can be verbal, many people can start to physically attack; even if they would never have usually done this.

There’s nothing wrong with developing a routine. This is normal behavior, especially as we get older. We figure out what we like and how we like it. Getting throw out of a routine can be initially daunting and stressful. This can lead to an initial panic until the situation is back under control. The problem for someone with early onset Alzheimer’s disease is that it can be nearly impossible to get back into the routine. They’ve been thrown out of their comfort zone and are scared because of that.

Aggression can also come out as they believe they are in a different time period. They mistake individuals for someone else and then become frustrated when that person doesn’t remember the events.

Helping Someone with Early Onset Alzheimer’s

Looking out for the signs of early onset Alzheimer’s disease can help a number of patients. It helps people understand the things that are happening to them, so they can set up routines and get the support from family members and friends. While there isn’t a cure or a treatment, there are steps to take to help strength the brain and possibly slow down the process.